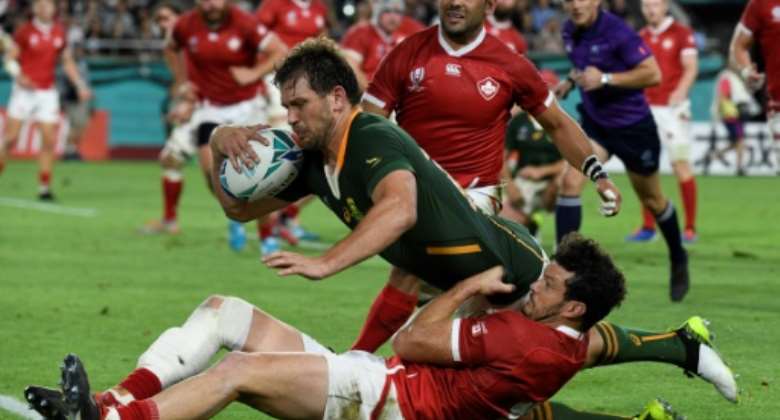 Frans Steyn is South Africa's cool and collected super-sub, according to coach Rassie Erasmus, and also the sole survivor of the Springbok team that last won the World Cup in 2007.

Steyn, now 32, came into the World Cup in Japan as one of only 15 players who had also played in the 2007 tournament in France.

Twelve years ago, Steyn, then just 20, started the final at inside centre and kicked one 49-metre penalty as the Boks ran out 15-6 winners at the Stade de France against England -- their opponents in Yokohama on Saturday.

"I'm just enjoying the week," Steyn said when asked about the build-up to the final, after Erasmus named him on the bench.

"The last time it wasn't so serious for me. I was a little bit young and I just thought there would be another opportunity.

"Now it's a little bit more serious because I know there won't be another opportunity. It doesn't come along every day to play in a final and we have to make it count."

Steyn had played just 10 matches, at fly-half, for the Sharks in the 2006 Currie Cup Premier Division when he was picked for the Springboks' autumn tour by then-coach Jake White.

At 19, he made a try-scoring debut on the wing against Ireland, before moving to fullback for his second game, against England, scoring a memorable long-range drop-goal from inside his own half.

His ease at playing anywhere in the backline did not go unnoticed, Steyn signing a lucrative, three-year contract with Racing-Metro in the Top 14 in 2009.

He played for the Boks again at the 2011 World Cup, where they were knocked out in the quarter-finals by Australia. Steyn went to to sign for two seasons for Toshiba Brave Lupus in Japan before joining Montpellier in 2016, where White was again his coach.

His move to Japan saw him take a three-year absence from the national team, but he was recalled in 2017 after injuries to Pat Lambie and current fly-half Handre Pollard.

"Frans is a difficult guy to tap into!" Erasmus joked of his taciturn utility back.

"He is definitely a calming factor in the team because he doesn't stress out a lot.

"That is why it is wonderful to have him on the bench, covering so many positions.

"It doesn't matter if you are ahead on the scoreboard or behind -- he just enjoys the game, no matter what the situation is. It does have a good calming influence on and off the field."

Erasmus has been opting for a replacements bench of six forwards and two backs. Herschel Jantjies provides scrum-half cover, while Steyn can slot in anywhere else.

"No, I've just been making jokes and being myself," was Steyn's response to queries on whether he was handing advice out to younger team-mates.

"I have just been trying not to stress. Everyone is prepared and we just need everyone to do well on Saturday."

England, he said, were "a very good team".

"We just need to win. We don't need to score 10 tries. If we win 3-0 then the World Cup is still going back to South Africa."

Steyn did admit, however, that long-range penalty goals worry him more now than when he was younger.

"When I was younger I didn't worry about it," he said.

"I am stressing a bit more these days. But Handre can kick very well and he kicks the ball a mile. I'm just there if they need me to come on, I'm there and just trying to do my best."