Far from the bombs: Somalis relax on floating restaurant 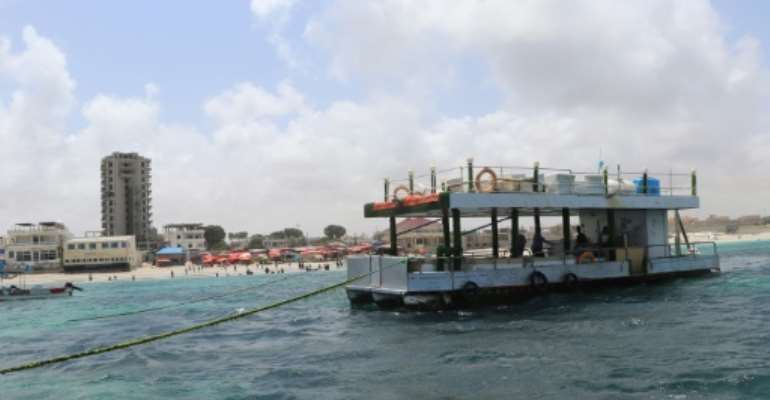 A floating restaurant off Lido beach has been a helpful distraction in Mogadishu, which is plagued by regular bombing. By Abdirazak Hussein FARAH (AFP)

Tucking into fresh seafood on a boat anchored in clear turquoise waters, which serves as a floating restaurant, Ahmed Yusuf can hardly believe he is in Mogadishu.

Nearby, on the pristine white shores of Lido beach, children scamper in pursuit of a football while locals stroll along or take a dip in the shallows of a notoriously shark-infested stretch of ocean.

In a city plagued by regular bombings by the Islamist group Al-Shabaab, leisure-seeking residents throng the beach which has seen a boom in construction of restaurants, prompting some business owners to get creative.

In January this year Abdulkadir Mohamed Ibrahim, a 48-year-old Somali entrepreneur who returned to his country from Italy, built and fitted out a double-decker boat with plush chairs and tables where diners can enjoy fresh seafood, a fresh breeze, and a sense of normalcy.

"Sometimes I don't feel I'm in Mogadishu," said customer Yusuf, who works for a non-governmental organisation.

"There is the sound of the waves and I watch the beautiful ocean while enjoying fresh seafood on the boat. I hope that we will have more of these kinds of businesses."

Ibrahim had previously tried to launch several businesses in Mogadishu, such as a travel agency, which were ultimately unsuccessful, before stumbling upon the idea for the restaurant "La Lanterna".

Ibrahim said customers would place their orders two days before their booking, so food can be prepared onshore and brought aboard, as the boat does not have space for a kitchen. However it does have fridges for cold beverages.

The sea can be choppy sometimes, but customers happily grip their plates as they dine, and sometimes enjoy a long ride out to sea when it is calm.

"I built this boat with the help of friends and it has got a capacity of 40 people at the moment, but I am planning to expand the capacity to 50 in the future," Ibrahim said.

"The sea is dark at night and there are no boats here at Lido beach except ours, so that is why I called it 'the Lantern', in Italian."

Several restaurants began popping up along Lido beach after Al-Shabaab was chased out of the devastated capital by African Union peacekeepers fighting alongside government troops in 2011.

Improved security also saw a return of Somalis from the diaspora after the 1991 overthrow of president Siad Barre's military regime ushered in decades of chaos and civil war.

Leisure-seeking residents have flocked to Lido beach, which has seen a restaurant construction boom. By Abdirazak Hussein FARAH (AFP)

The beach -- a rare public space in the city -- became a popular spot.

This made it a target for the Al-Qaeda-affiliated Shabaab, which continues to stage regular strikes on the city and in 2013 and 2016 launched deadly attacks on beachfront restaurants with suicide bombers, grenades and gunmen.

"Security of customers is the main concern... we try to ensure that people are searched properly before they board the boat. It is not as easy as coming to the beach where everybody has access," said Ibrahim.

"We started this business and I hope others will follow suit. People need entertainment after days of work and stress and we are making reservations for more clients every day. Our aim is also to attract investors and tourists."

Fadumo Ahmed Mohamud is visiting the restaurant for the first time on a visit home from the United Kingdom.

"This place is very beautiful, and the country is making relative improvement. Today we had our lunch on board the big boat on our beautiful ocean. This is an amazing experience which I never imagined these days, in this place," she said.

The NGO worker Yusuf said he spends most weekends at Lido Beach and often dines at La Lanterna.

"It kills your stress as soon as you are boarded, I don't fear blasts and suicide bombs because you distance yourself from the big buildings and enjoy the ocean," he said.