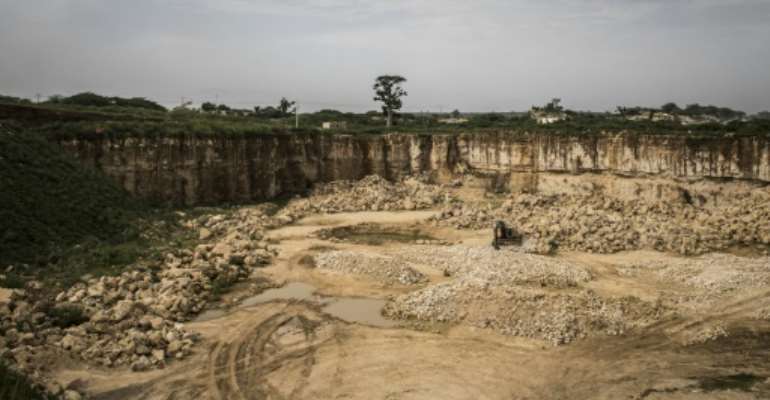 Once one of Senegal's most beautiful baobab forests, Bandia is being devoured by limestone quarries. By JOHN WESSELS (AFP)

One hour's drive from Senegal's capital Dakar, demand for cement is turning a protected baobab forest into a lifeless moonscape of open mines, dust clouds and lorry traffic.

The bulbous trees are a national symbol in Senegal, where locals have long prized their many uses -- from tea brewing to ropemaking.

But a construction boom in the seaside capital driven by housing shortages is pushing cement manufacturers to quarry more limestone, one of their key ingredients.

In Bandia, 65 kilometres (40 miles) west of Dakar, one of Senegal's most beautiful baobab forests is gradually being devoured by these quarries. Locals complain that mining activity is crumbling their houses and damaging their health.

Khady Ciss, an octogenarian woman who lives on the outskirts of the forest, said explosions from the quarry shake and crack her walls.

"Sometimes we wake up at night with a jolt, thinking we've escaped a bomb," she said, draped in a white shroud standing against her fractured bedroom wall.

The might baobab is a national symbol of Senegal, where locals have long prized the tree's many uses. By JOHN WESSELS (AFP)

Hers is one of a number of lives turned upside down by the 2002 arrival of Senegalese cement-maker Ciments du Sahel in Bandia, a sleepy town of 10,000 inhabitants.

White dust from the company's 20 quarries in the area coat the village as well as the baobab trees. Its huge plant is visible from miles around.

The government, keen to support local industry, approved an expansion of 236 hectares (580 acres) for Ciments du Sahel in June.

But President Macky Sall has come under fierce criticism for the decision and Bandia residents staged a protest last month demanding he intervene.

A government official who spoke to AFP on condition of anonymity said the approval had not yet been finalised.

Decrying a "media lynching", Ciments du Sahel denied its activities harm locals. In a statement seen by AFP it said that its plant lies five kilometres from Bandia village.

'Not one flower is left'

Khady, who lives on the outskirts of the forest, stands next to cracks in her walls caused by explosions from the quarry. By JOHN WESSELS (AFP)

"It's only a matter of one week, one month perhaps," she said, adding that the bees have also disappeared.

Mame Cheikh Ngom, a University of Dakar geography professor who grew up in Bandia, said the area had changed beyond recognition.

"There were mango trees here, eucalyptus, acacias, and baobab. When I was a boy, we played among the trees," he said. "They've all fallen down, one after another", Ngom said in Bandia, pointing out an abandoned mine in the distance.

"Now mothers tell their little ones not to play in the forest -- they're afraid they will be crushed."

Bandia forest has had protected status since 1933 and is home to a wildlife reserve with rhinos, zebras and giraffes that is a hit with tourists.

"Look, not one flower is left, not one animal. Here, nature can no longer retake its rightful place," he said above the noise of passing lorry traffic.

Senegalese Environment Minister Abdou Karim Sall told AFP that Ciment du Sahel's activities are lawful. The ministry vetted the environmental impact before permitting the company to mine, he said.

Sall added that the government is committed to protecting its forests but that as one of the 25 poorest countries in the world it must also encourage industry.

Despite recent economic growth, the World Bank estimates that 40 percent of the West African country's population live in poverty.

"It must be understood that if the government decides to delist a (protected) forest, nothing can oppose it," the environment minister said. He added that when the government does delist, it reforests in other areas.

Bandia forest has had protected status since 1933 and is home to a wildlife reserve. By JOHN WESSELS (AFP)

The official who spoke on condition of anonymity said the government had been taken aback by the breakneck pace of cement production.

"We're in a situation of overproduction, cement-makers are even disposing of their product abroad," the official said.

"Ciments du Sahel obtained 236 hectares but they originally asked for the triple that... For the moment, their expansion project is on ice."

In Bandia, residents are sceptical of promises. Local nurse Mariama Diene said quarry bosses had not sprayed water -- as they are supposed to -- to prevent clouds of limestone dust.

"We have seen a terrifying rise in cases of bronchitis, pneumonia and tuberculosis. From infants to the elderly, no one is spared," she said.

"The exploitation of this forest has been a catastrophe."