By Hicham Rafih with Sophie Pons in Rabat 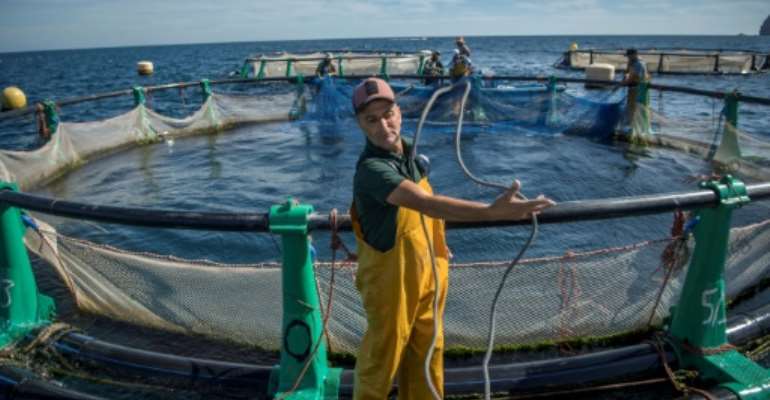 Aquaculture offers hope to struggling fishermen in the Moroccan city of M'diq. By FADEL SENNA (AFP)

With fish stocks declining in the Mediterranean, struggling Moroccan fishermen are hoping to turn to aquaculture as a way to secure their future.

"We don't get anything from the sea anymore, we're paying for the mistakes of our fathers," said Mohamed Bouajra, a fisherman in Ras Kebdana, a port town near Morocco's eastern border with Algeria.

But aquaculture offers a "glimmer of hope for escaping poverty", he said.

In Ras Kebdana, the Al Amal cooperative for independent fishermen is banking on the development of an offshore mussel farm to maintain future livelihoods. 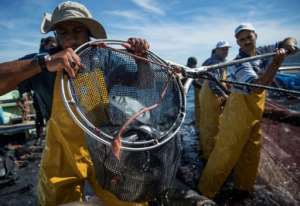 Fishermen say they are paying for the "mistakes of our fathers", with no fish stock left in the sea. By FADEL SENNA (AFP)

While the number of fishing boats in Ras Kebdana has tripled since the 1990s, "there are no more fish", said Bouajra.

Now in his 60s, Bouajra recalls the good days when fishing from his wooden boat would bring in 400 dirhams a day ($41).

Figures from Morocco's department of maritime fishing confirm the decline. Catches in the eastern Oriental region dropped from 14.7 tonnes to 7.4 between 2013 and 2017.

Depleted fisheries are a financial concern, as exported seafood brought 22 billion dirhams in 2017 ($2.2 billion), about half of food exports and 10 percent of total exports.

"With climate change, the environment is deteriorating and fish are becoming scarce -- not only in Morocco but across the world. We need to find alternatives to survive," said Mimoune Bouasu.

The cooperative sells the seaweed for six dirhams a kilo to a Moroccan company that invested in the venture. 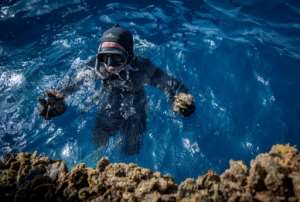 A diver gathers mussels in a farm off the coast of the port city of Nador in Morocco. By FADEL SENNA (AFP)

"What we lack from fishing, we get from the algae," said Bouasu, adding that he hopes the project will increase in size.

Further west along the Mediterranean near the Strait of Gibraltar, Abdelaziz Benhamou is in charge of production at an aquafarm in M'diq.

It is considered a model fish farm by the National Aquaculture Development Agency (ANDA), which hopes to replicate the project elsewhere on the Mediterranean or Atlantic coasts.

"Resources diminished because fishermen didn't respect closed seasons for most species. Today, that's starting to change, but everyone agrees that nothing is like before," the 50-year-old former fisherman said.

The court also highlighted delays in developing the aquaculture sector, noting that "certain strategic objectives have not been met". 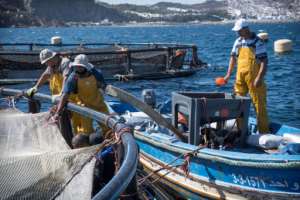 Fishermen work on a fish farm off the Moroccan city of M'diq on the Mediterranean. By FADEL SENNA (AFP)

After several years of technical studies, some 150 projects are now "in the process of launching" with private investment, according to Mustafa Amzough.

A manager at ANDA, Amzough says these projects -- including 15 in the Mediterranean -- have a total objective of 150,000 tonnes.

In Ras Kebdana, undersea nets for growing mussels have only been installed across five of the site's 15 hectares. And the shellfish are still not ready for harvest, five years after the project was launched.

The 35 members of the cooperative maintain the mussels, hoping to begin sales next year.

In the meantime, boats continue going out for octopus, the main seafood available in the area.

But despite this, fisherman Bouajra says the mussel farm has already changed people's mindset. "Before, there was no respect for the environment."

Now there is weekly water sampling and analysis to monitor the health of the water.

"Today, the water is clean," he said.