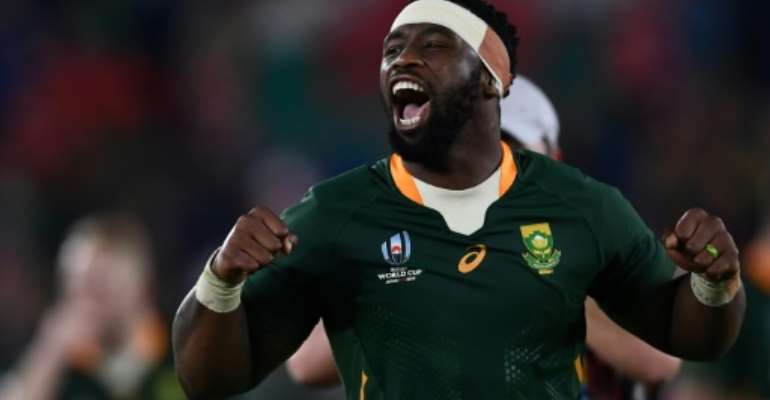 South Africa's captain Siya Kolisi carries the weight of the Rainbow Nation on his shoulders. By CHARLY TRIBALLEAU (AFP)

Siya Kolisi carries the weight of the 'Rainbow Nation' on his shoulders as the first black captain of the South Africa rugby union team, a long-time bastion of the country's white Afrikaner community.

Coach Rassie Erasmus named Kolisi skipper when he took over from the sacked Allister Coetzee last year, a bold statement for a team that does not have a specific quota system, but does have a 'transformation' target of 50 percent players of colour.

The current 31-strong squad, which plays England in the final of the Rugby World Cup in Yokohama on Saturday, has 12 black players (39 percent). Roughly 10 percent of South Africa's 57 million citizens are white.

"I'm just happy to be the captain, being the first black captain isn't something that comes to mind," Kolisi insists.

"I'm just really happy for the huge privilege that it is, and for anybody who comes from my community or any community, I just want to represent all of the people there."

Like it or not, Kolisi has become the standard-bearer for a country that famously won the tournament on home soil in 1995 in front of then-president Nelson Mandela in the first major sporting event to take place in South Africa following the end of apartheid.

"Yes, we do have many different races in our country, and 11 different languages," said the 28-year-old Kolisi, who grew up in the poor black township of Zwide outside Port Elizabeth.

"It is one of the positives of our country. I think it's really beautiful. That's why we are called the 'Rainbow Nation'.

"In the team as well, we have different races, which is really beautiful -- it is very important for our country to do well and win matches.

"It just shows that when we decide to work together for one goal or as a team and as a country, we can make anything happen, and achieve all the goals and dreams."

Kolisi is hoping to lift the Webb Ellis Cup at the end of Saturday's match. By Jonathan WALTER (AFP)

"Siya's got a lot of weight on his shoulders in terms of his role of captain with regards to the make-up of our country and our nation, where we've come from and where we are right now," the Bath player said.

Ex-Springbok Bryan Habana described Kolisi as "an inspiration for many, not only rugby players but people in South Africa".

"He had a very hard upbringing where he wasn't sometimes worried about the type of rugby boots he could wear for training, but more about what food he was going to eat that night because they were just so underprivileged," said Habana, who was part of the Bok squad that won the 2007 World Cup.

"To see his rise to the top and know that he could potentially be the first black South African captain to bring that Webb Ellis Cup to South Africa would be incredibly inspirational."

A victory over the English, who beat defending champions New Zealand 19-7 in the semi-finals, Kolisi added, "would be huge for our country, as I've seen what it has done for the country before".

"I was old enough to remember the 2007 World Cup -- I remember what it did for the country then, and I know what it would do now. I went to the tavern to watch it because we didn't have a television at home."

'All walks of life'

Kolisi's mother, aged just 16 when she gave birth to him, died when he was 15, three years after he had been noticed by scouts at a youth tournament and offered a rugby scholarship to Port Elizabeth's prestigious Grey High School, breeding ground for many a South African rugby player and cricketer.

"What Siya has achieved has been remarkable," said prop Tendai Mtawarira.

"For a young kid from Zwide township in Port Elizabeth to rise above his circumstances and become Springbok captain, and lead the way he has, it's been inspirational to all South Africans -- from all walks of life.

"We are all proud of him, and we ultimately want to make it very special for him on Saturday."

Mtawarira, himself born in Zimbabwe, added that it was "really important that the team is well represented".

"I've had the privilege to see the team evolve to get to now... so many guys of colour who have been excellent and are deserving of their places in the squad," he said, dispelling the myth that it was a 'quota team' in which black players were picked ahead of better white ones.

FixingTheCountry Movement to march in support of Akufo-Addo'...
48 minutes ago