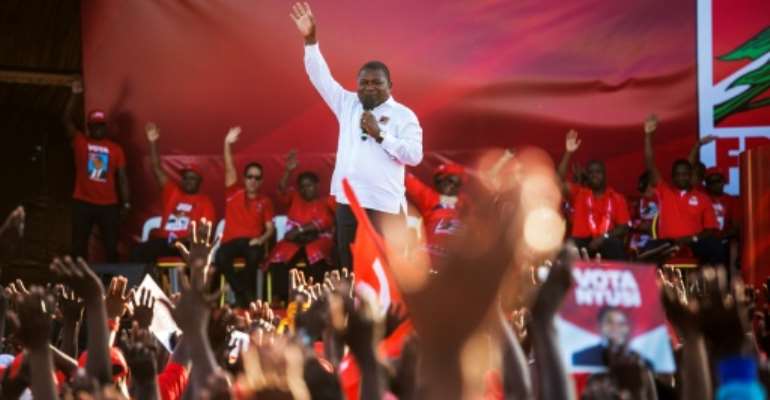 Renamo, the rebel group turned opposition party, lost the election to the long-ruling Frelimo party, securing under 22 percent of the vote, the electoral commission announced Sunday.

Having previously called for the election to be annulled, the opposition submitted an official complaint to the National Electoral Commission (CNE) to be judged by the constitutional council.

"With this complaint we take on also all the misconduct that took place during the elections, and its evidence is well documented," Renamo's national spokesman, Venancio Mondlane told journalists outside the National Election Commission (CNE) headquarters in Maputo after submitting the complaint.

"The results of the elections are null and void."

Renamo has accused the government of "massive electoral fraud" and breaching the country's peace deal by using violence and intimidation on voting day.

The lower courts have so far convicted 158 people over electoral misconduct, while at least 140 more are still awaiting trial.

Fourteen of those convicted were arrested for ballot box stuffing.

At least 58 electoral irregularity complaints, by Frelimo, Renamo and the Democratic Movement of Mozambique submitted over election fraud were rejected by the district courts in the provinces of Nampula, Maputo, Sofala, the Supreme court said this week.

Of those rejected, six cases were sent to the constitutional court to seek further judgement.

Supreme court spokesman Pedro Nhatitima said the majority of the queries were thrown out of court because they weren't lodged within the legal deadline of 48 hours of the election results being posted.

Mozambican civil society and international observers have flagged numerous alleged attempts to stuff ballot boxes and chase away election monitors, as well as hundreds of thousands of so-called "ghost voters" on the electoral roll.

The Electoral Institute for Sustainable Democracy in Africa (EISA) said it was regrettable that irregularities in voter registration had not been addressed before the elections.

Mozambique has seen one of its most violent election campaigns ever.

At least 10 people were killed in the run-up to the polls, according to a local observer mission.

Among the killings was the murder of a prominent election observer -- suspected to have been carried out by a special police unit -- and that of the Renamo Women's League leader, whose bullet-ridden body was found with her husband's in the western province of Tete.

Frelimo, which has ruled Mozambique since independence from Portugal in 1975, has hailed the elections as free and fair.

Observers from the Southern African Development Community (SADC) also approved of the election, saying the run-up to the vote and the balloting itself were "generally peaceful and conducted in an orderly manner".

Despite numerous opposition party complaints, SADC observers have also endorsed elections in Malawi, Zimbabwe and Botswana in recent months, declaring them all to be free and fair.

Frelimo and Renamo, which fought a brutal civil war from 1975-1992 that left one nearly million people dead, signed a peace deal in August hoping to turn the page on decades of conflict.

NDC Postpones Rawlings’ Probity And Accountability March To ...
4 minutes ago