Deadly attack on military base in southeast Niger 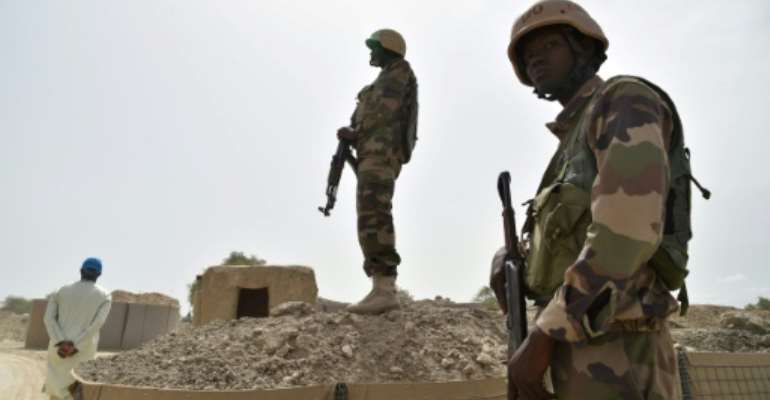 Gunmen launched a deadly predawn raid Wednesday on a military base in southeastern Niger's Diffa region, which has been a target of Boko Haram jihadists, local sources said.

It is the latest in an increasingly brazen string of attacks near the west African country's Nigerian border, where the radical Islamist insurgency has claimed hundreds of lives.

"The Blabrine military unit was targeted last night. The situation is ongoing," a municipal source told AFP on condition of anonymity.

Around 10 people were killed during the raid which was launched around 3:00 am (0200 GMT), the source said, adding that the situation was unclear and not yet under control.

"The local civil authorities are preparing to assist the population," the source said.

A senior official in Diffa, where the Blabrine base is located, confirmed the attack.

"There have been deaths and military equipment has been torched," the official said.

Diffa, which borders the birthplace of Boko Haram in northeastern Nigeria, has been hit by repeated cross-border attacks by the Nigerian jihadist group since 2015.

There was a lull in the attacks late last year, but they have ramped up since March when 10 civilians were killed by a suicide bomber in the town of N'Guigmi, about 40 kilometres (25 miles) from the Blabrine base.

The mayor of Kabalewa, a village close to N'Guigmi, and his wife were kidnapped by Boko Haram members earlier this month.

The jihadist group has also previously carried out large-scale assaults on military posts, including a raid on a base near the southeastern town of Bosso in 2016 in which 26 soldiers were killed.

'Threat spreads to the south'

A regional military coalition is battling the group, but the decade-long insurgency has killed at least 35,000 people in Nigeria alone.

Located in the Lake Chad basin in the middle of the Sahel, the Diffa region is home to 120,000 refugees from Nigeria fleeing the Boko Haram violence, as well as 110,000 people internally displaced within Niger, according to UN data released this month.

The region has also seen flooding after heavy rains caused the Komadougou Yobe river to burst its banks, affecting at least 40,000 people, the government has said.

As well as facing Boko Haram to the southeast, Niger is also battling jihadists -- including those from the Islamic State group -- in the west near the Malian border.

Niger's President Mahamadou Issoufou has repeatedly called on the West and the United Nations to help the country battle the jihadists.

But the presence of French, American, and German forces in Niger as well as the UN in Mali has not stopped the increasing attacks.

"Not a day goes by without loss of life," Issoufou said last month, warning that the situation was urgent as "the threat spreads to the south".