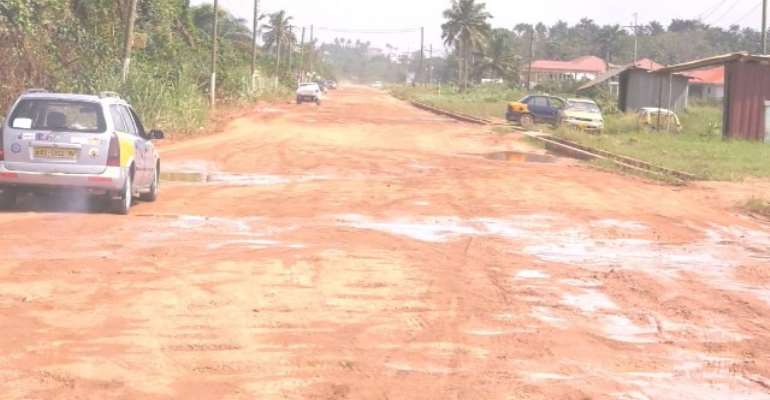 Irate residents of Nkroful have embarked on a demonstration to protest the deplorable state of the Nkroful-Essiama road.

The residents of the hometown of Ghana’s first President, Dr Kwame Nkrumah, during their protest on Wednesday, threatened to boycott any national activity if the government does not heed to their request.

Speaking to JoyNews’ Ina-Thalia Quansah, Chief of Nkroful, Nana Kwasi Kutuah V, said the poor nature of the road has affected development and growth in the community, therefore the need to protest.

The Chief defended his people saying, “it is a constitutional right to tell the government that we are not happy by the state of our road.”

“Former President Mahama promised us but he did not do it, Nana Akufo-Addo was here 2016 and promised to fix it for us and he has still not done it,” he stated.

He noted that the current state of the road has not only affected social and economic activities in the town but activities of companies operating in the District and tour sites.

“We want to register our frustration so that the government will come and fix this road for us, we will continue to demonstrate until they respond to our plight,” he emphasised.

Nana Kwasi Kutuah V also applauded his people for their support and unerring commitment to help develop the Nzema Land.

Adding his voice, the Chief of Awia, Nana Simanle Kpayinli V, said the people are frustrated following the frequent failure of promises by both the central and local government to fix the 26.5km stretch.

“We decided to embark on this demonstration about five months now but the DCE [District Chief Executive] and the MP [Member of Parliament] asked us to stop and promised to fix the road. But up till now, we have not seen anything,” he recounted.

The chief added that “I am here, purposely for this road. If I am here today with my people it is not because of politics. It is not NPP or NDC. It is purposely for the development of Ellembelle, because all our roads are in a bad state.”

The Nkroful-Esiama road in the Ellembelle District has been in terrible shape for many years despite promises by successive governments to fix it.