I Left The Economy Good – Mahama 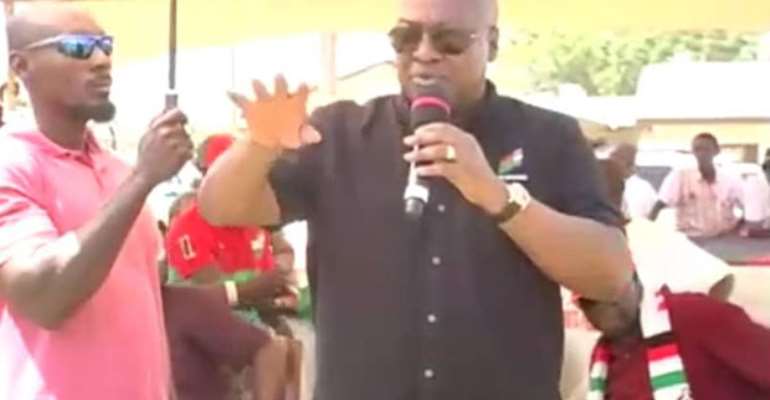 Former President John Dramani Mahama says Ghana's rapid economic growth was the prudent measures put in place by his government before the party lost power in 2016.

He added that through his performance that Ghana has been ranked one of the fastest-growing economies in the world currently and not due to the efforts of President Akufo-Addo and his economic management team.

Addressing opposition National Democratic Congress (NDC) supporters in London, England, on a recent visit, the former President who is leading the NDC for the 2020 presidential election said “whatever is responsible for the growth, the growth is only in the oil sector.”

He said, “All that growth, fastest-growing economy in the world, it's the oil sector and where are those revenues coming from? They are from the TEN field and the Sankofa field that we worked on in our time.”

He claimed that in 2016 when economists were saying Ghana's financial situation could be likened to someone in intensive care, he predicted that the country was going to be one of the fastest-growing economies.

“And that made me, in 2016, say that Ghana was going to be the fastest-growing economy in the world and that we are going to grow above eight per cent. I predicted it before they came into office,” Mr. Mahama said without supporting his claims with any figures.

“And, so, you (Akufo-Addo government) come into office – we were receiving less than a billion cedis in revenue from oil – and because of TEN and Sankofa, you're receiving almost GH¢4 billion in revenue; four times what we got. And then we introduced ESLA and you were so much against ESLA and said when you come, you'll repeal it; ESLA is bringing GH¢3 billion more revenue than what we got.

“And, so, you're seeing growth based on those revenues; you didn't introduce them, you're just the beneficiary of the hard work that the previous government did. And yet that's what they are trumpeting: the fastest-growing economy. It cannot be by accident. Yes, it is not by accident because we worked just to make it happen,” the former President told his audience.

The former President's comments were coming on the heels of a recent assessment made by the Chief Economist for Africa at the World Bank, Dr. Albert Zeufack, in Washington, DC, United States.

Ex-President Mahama's wild claim is likely to trigger heated political debate because he stands accused of supervising a very weak economy that brought untold hardships to the people.

In 2016, when he was gearing up for a second term that was not to be, the Institute of Statistical, Social and Economic Research (ISSER) of the University of Ghana, Legon, released a report indicting his NDC government for its handling of the economy.

“It represented a further decline from the 2015 rate of 3.9%. Although the 2016 outturn of 3.6% growth was substantially higher than the anaemic rate of 1.4% registered by sub-Saharan Africa (SSA) as a whole in 2016, it fell short of the 4.1% (revised) target,” adding, “Moreover, the country's overall GDP growth rate was below that of the non-oil sector of 4.6%, a continuation of the underperformance of the oil sector.”

The 2016 and 2018 economic indicators show clearly that President Akufo-Addo has outperformed Mr. Mahama when he led in 2016.

Fiscal Deficit under NDC was 9.3% (6.8% of rebased) but has dropped to 3.8% under Akufo-Addo and his NPP administration, while inflation stood at 15.4% when the NDC was exiting power. It is currently around 9.4%.

Total public debt stands at GH¢173 billion including the cost of the banking sector clean-up of GH¢12billion from GH¢122 billion left behind by Mr. Mahama and his NDC whilst total Public Debt (%GDP) was 56.8% under NDC and currently stands at 54.8% (58% – including bank bailout).

Standard and Poor's (S&P) Global rating put the NDC at B- but due to competent management it has improved to B (March 16, 2019) under NPP.

Last month, the World Bank outlook on Ghana was that “two and a half years after being elected president in a peaceful election, President Akufo-Addo has marked some successes implementing some of its promises such as planting for food and jobs and free secondary education,” notwithstanding some challenges.

It said “Ghana's economy continued to expand in 2019 as the first quarter gross domestic product (GDP) growth was estimated at 6.7%, compared with 5.4% in the same period of last year. Non-oil growth was also strong at 6.0%. The relatively high quarterly growth was driven by a strong recovery in the services sector which grew by 7.2% compared with 1.2% in 2018.”

“The government continued with its fiscal consolidation efforts in 2019 even though there were still challenges in meeting the revenue targets. Fiscal performance for the first half of 2019 showed an overall budget deficit (on cash basis) of 3.3% of GDP higher than the target of 2.9% of GDP. This is because the revenue shortfalls of 1.6% of GDP were higher than expenditure cuts of 1% of GDP.”

Private sector credit grew stronger, supported largely by the well capitalized banking sector. Inflation continued to be in single digits in the first six months of 2019, gradually rising from 9% in January to 9.5% in April 2019 but reduced to 9.1% in June 2019 mainly driven by low food inflation.

Ghana's current account in the first half of 2019 was estimated at a surplus of 0.1% of GDP supported by favourable trade conditions of Ghana's three main export commodities—oil, gold and cocoa, resulting in a trade surplus of 2.8% of GDP. The current account surplus, combined with significant inflows to the capital and financial accounts, resulted in an overall balance of payments surplus equivalent to 1.9% of GDP. With the issuance of the $3 billion Eurobond in March 2019, the international reserves significantly improved in 2019 with Gross International Reserves (GIR) of $8.6 billion (equivalent to 4.3 months of import cover) at the end of June 2019.”

The Ghana cedi came under considerable pressure in the first quarter of 2019 due to high demand, as importers sought to restock their supplies but, in the second quarter, the domestic currency market became relatively calmer. The Ghana cedi cumulatively depreciated by 8.2% in the year to July 18, 2019.

The World Bank predicts economic growth to increase to 7.6% in 2019. Non-oil growth is expected to accelerate to 6% as the government's new policies in the agricultural sector and the promotion of agribusiness begin to take effect. Inflation is expected to remain within the central bank's target range of 6-10% over the medium term.

The pace of fiscal consolidation is expected to slow in 2019 and the overall fiscal deficit is projected at 4.5% of GDP in 2019 and, in the medium term, it will remain within fiscal rule ceiling of 5% of GDP.