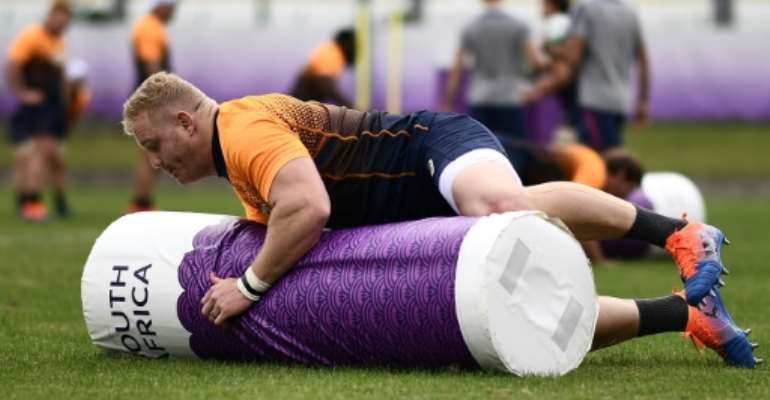 But they have also played a pivotal role in the development of Springbok front-row Koch, who has been making a huge impact off the bench at this World Cup as part of South Africa coach Rassie Erasmus's tactical plan to ensure the team maintains the scrum dominance that is key to their game-plan.

"Moving to Saracens was quite a big decision for me," the 29-year-old Koch told reporters at South Africa's hotel in Tokyo on Wednesday.

"As a player I have grown quite a lot. They have worked on me to try and make the perfect player.

"Over the last three years they have made me work harder and prepare better for big games," he added.

"Mako, I have scrummed quite a lot against him in training... It is a bit different, it's not a training field, it's a big Test so I'm quite excited about that."

England dethroned reigning world champions New Zealand with a stunning 19-7 semi-final win, whereas the Springboks ground out a 19-16 victory over Wales in their last-four clash.

"We have played them (England) four times in the last 18 months and it is a draw," said South Africa forwards coach Matt Proudfoot.

"They were very efficient and very powerful against New Zealand, the trend-setters. We need to match that intensity. It wasn't just brute force, there was very intelligent play from their pack," he added.

"Up front I think they're a lot more confident in what they're doing. In terms of their efficiency of execution, it's a lot better.

"For myself, I am very pleased with our pack's performance."

Victory in Yokohama on Saturday would mean South Africa had won the World Cup for the third time after their 1995 triumph on home soil and a win over England in the 2007 final in Paris.

"I think South Africa as a country has got a lot of challenges," said Proudfoot.

"We are resilient people. What 1995 meant created a new opportunity for people in South Africa."

"But we can't get caught up in that, we've got 80 minutes against a world-class team coming up."