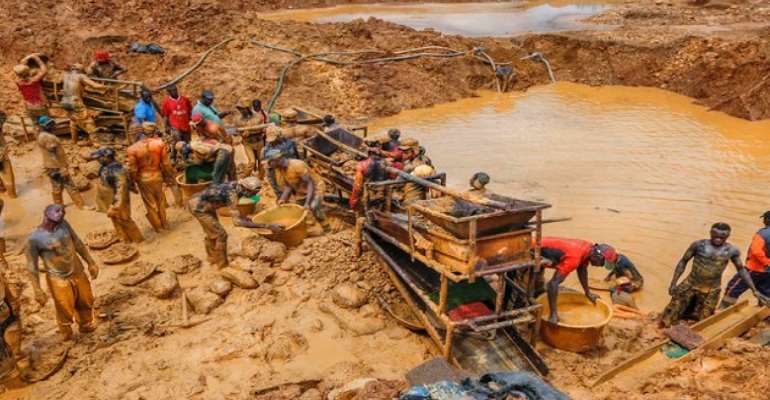 IN an article published in September 2019, I wrote:

QUOTE: “I would like to reiterate something that I said in [another] article, entitled: “LAWS ARE MERE WORDS WRITTEN ON PAPER” (The Ghanaian Times 17 September 2019), namely, that “Court cases can serve as a means of educating the public. If I were the Attorney-General and Minister of Justice, I would go to court myself to prosecute the 20 Chinese arrested on Friday, 13th September 2019.”

Needless to say, my suggestion has been received with the usual STONY SILENCEwith which the Ghanaian Establishment often reacts to matters raised by the public, pertaining to the public interest.

Members of the public services have been appointed to their positions on merit. So who is to imply that they do not know what is in the public interest? The idea of it! As long as they do not offend His Excellency the President or his Ministers, public servants will be at their posts. Mere commentators can yelp and yelp. They will be ignored. Unless the topmost officials of the state express concern! And THEY choose what to be concerned about! It is an attitude close to fascism, no less!

Unless, of course, the commentators happen to be of the type who peddle hyperbole daily on radio and television; commentators whose idea of “the public interest” seems only to embrace allegations against persons; who direct personal attacks at people to provoke an immediate response, and thus keep the peddlers of hyperbole in business for a week or more, as allegations upon wild allegations bring out response after response, only to produce counter-attacks!Sober dispassionate commentary? Just a waste of breath, as far as most of our public officials are concerned. Or at best, to be pooh-poohed with dissembling jargon of enormous length!

Lord save us! It's not only the officials who do not care about the public interest. How many newspapers and other media reported the recent finding in a credible study that "50,000 Chinese nationals are engaged in galamsey in Ghana"? The media's attention was directed elsewhere. Money was suspected to have been chopped somewhere (again!) So the Chinese were doing galamsey? What's new? How boring!

Indeed, issues of genuine public interest discuseed on Features Pages (as against the front/back news pages!) appear not to have any place in, for instance, newspaper reviews on radio and television! And yet, unless a cacophony of flak is created on radio and television, it appears no notice is taken of anything said about the public interest. Hence, we are in a vicious circle, chasing our own tails with irrelevant discourse!

A vicious circle? Yes, wait for it – those who don't take notice of things said calmly and soberly in the public interest, are, paradoxically, the very people who turn round to lament that our media are “shallow”, “superficial”, “sensationalist” , “dishonest” or even “corrupt”! And they justify their lack of concern by claiming that most media comment on their activities is "based on ignorance"; or "stems out of malice"; or has been paid for with brown envelopes full of "soli"! Somebody is always after their jobs, you know?

Now why am I so worked up? I will tell you why: more than a month has passed since the TWENTY CHINESE NATIONALS and some Ghanaians were arrested, as they engaged in galamsey. One would have thought that in the new “regime” of zero-tolerance of galamsey, signalled by the passing of le4gislation imposing mandatory prison sentences for galamseyers, these Chinese law-breakers and their Ghanaian sponsors would be processed and taken before the courts in double quick time “pour encourager les autres”? [serve as a deterrent to other would-be law-breakers]? After all, hadn't the President of the Republic himself castigated state institutions that deal with such offences as being "delinquent" at their jobs? Where else but in sleepy Ghana would an AG's office, in the face of such a stinging rebuked from the President, continue being as somnolent in stupor, as before?

In Ghana, the same old way of doing things has held "delinquent" sway! I imagine it works like this: first, laboriously find out from the Immigration authorities, whether the Chinese people were in Ghana lawfully. That could take 6, 10 or 20 months! – (we all know that staff shortages at the Immigration Department inevitably slow down investigations, don't we?) Of course, it doesn't occur to anyone charged with prosecuting galamsey operators that if a person has been caught breaking the law by engaging in galamsey, then his immigration status is IRRELEVANT! ...IRRELEVANT!!... and IRRELEVANT!!!

In my article referred to above, I also specified that if I were the Attorney-General and Minister of Justice, I would take a leaf out of the book of one of my illustrious predecessors, the late Bashiru Kwaw Swanzy, and construct a simple and clear narrative of the case against the galamseyers, to be presented to the court. This, I must explain (again) would serve as an educational presentation, that would dramatically affect public attitudes towards galamsey offences. That way, whether the courts find the accused guilty or not, the effort made in prosecuting the offenders, would not have been a waste of time.

Kwaw Swanzy made many mistakes, but at least he taught Ghanaians who are not “learned” lawyers to understand what was meant by, sazy, “misprision of treason”; or “conspiracy to conspire”; and “dichotomy in the credibility of a witness”. He's gone to his grave with other hitherto inscrutable legal terms.

You see, he took his job of protecting Osagyefo the President, Dr Kwame Nkrumah, very seriously indeed. And if he had not, his own party would have agitated to have him booted out! Yet Kwame Nkrumah was only one person, whereas with galamsey, offences, we are talking of treason against the FUTURE OF THE ENTIRE NATION of Ghana! Where is the concern within the NPP to be found, apart from a few individuals like Joe Osei-Owusu, Deputy Speaker of the National Assembly?

Indeed, it must be stressed that if we allow galamsey to destroy all our water-bodies – which it shall surely do if it goes on at the current rate – future generations of humans cannot continue to subsist on this glorious land of ours, after the present IGNOBLE generation is dead and gone!

A lady Romanian chemist who once worked here remarked to me that “Ghanaian water is one of the best in the world!” This was after she had taken samples of water all over the country, in preparation for an industrial enterprise that depended on the availability of good, clean water for its success.

FIFTY YEARS ON, SHE WOULDN'T TOUCH THE WATER IN ANY OF OUR BIG RIVERS (SUCH AS "SWEET" DENSU)!

She also told me that “in Ghana, if you cut a stick and plant it in the ground, it will grow into a tree!” If she saw what we have done to our ENVIRONMENT today, especially our rivers and streams and the forests that protect them, she would spit on each and everyone of us.

Hmm, at the risk of tiring your brain out, may I suggest the following action lines, please?

Inasmuch as the destruction of our water bodies through galamsey is as harmful to our society as corruption, and whereas we have found it necessary to create a Special Prosecutor to take on cases of corruption, can we, at the very least, not assign one or two sharp lawyers in the AG's office EXCLUSIVELY to prosecute galamsey cases, please? If such prosecutors are appointed, they should be named, so that if galamsey cases continue to be delayed, we shall know who is responsible. If they succeed, they should receive the credit -- such as Kwasi Gyeke-Darko once did, when he was one of the Senior Counsel in the AG's Departmernt.

If appointed, these special lawyers must ensure that the courts do not unnecessarily adjourn galamsey cases that come before them. In this connection, funds should be made specially available so that the idea mooted by the former Chief Justice, Mrs Georgina Theodora Woode, that special galamsey courts should be established, CAN BE URGENTLY REVISITED.

The National Media Commission should be alerted by the AG's office to the dates of approaching galamsey trials, so that the NMC can ALSO alert the media and threaten tol monitor the coverage given to the trials by the media, especially the state-owned media.

The Government itself should get behind these measures by declaring that the struggle against galamsey is no longer merely a CAMPAIGN by the Government, aimed at protecting our future generations, but a CRUSADE.

The Government should let those who want to laugh at such a “CRUSADE”(if one is launched) do so. We know AT whom the “last laugh” will be directed by – their own grand-children and great-grandchildren! These children, now ever so precocious, will ask them, one day: “Ei, so Grandpa/Grandma, you sat down and allowed foreigners and their Ghanaian collaborators to destroy big rivers like the Ankobra? I have seen pictures of the rivers before and after galamsey! How could you allow them to be ruined in a search for gold? Don't you remember the story of King Midas and his quest for gold??”

You doubt that future generations will direct such mockery at us? Then you don't know children! Pick any modern 6-/7-year-old child, and ask him/her what should be thought of people who deliberately destroy their own drinking water – in search of gold!