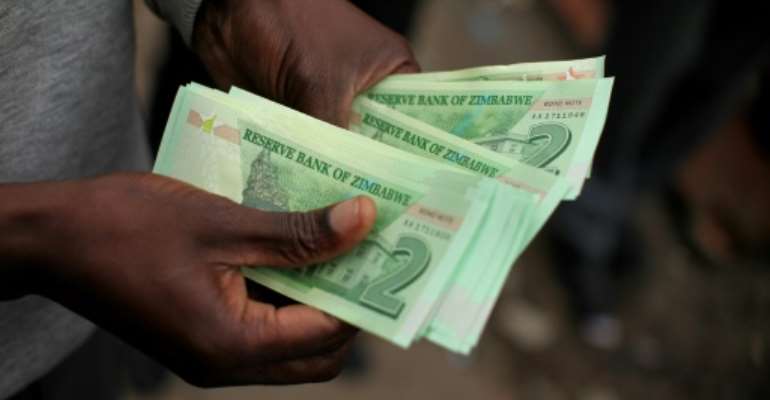 Electronic money and "bond" notes -- a legal tender pegged to the US dollar -- were introduced to ease cash shortages. By Wilfred Kajese (AFP)

Zimbabwe will introduce new notes and coins next month in a bid to resolve cash shortages stifling the country's ailing economy, the reserve bank said Tuesday.

But some economic analysts say the measure will do nothing to address the country's underlying economic problems.

The bank announced plans to roll out two new notes and an additional coin in the next fortnight.

The new money would be added to existing "bond" coins and notes "to ensure we don't starve the market", he added.

Electronic money and "bond" notes -- a legal tender pegged to the US dollar -- were introduced to ease a transition back to Zimbabwean dollars.

The southern African country is still reeling from decades of economic mismanagement under former president Robert Mugabe, which drove inflation through the roof and rendered local money worthless.

After relying mainly on a dwindling supply of US dollars for a decade, the government introduced two local currencies in June this year -- "bond" notes and electronic RTGS dollars.

But cash remains hard to come by, and most people use mobile money and now-banned foreign currencies to pay for goods.

Mangudya said the new money would be injected by converting electronic RTGS money into cash.

The bank was being "conservative" and beginning with low denominations that would "graduate with time", he added.

The Zimbabwean dollar was the country's official post-independence currency until 2009, when 500-billion percent inflation forced the government to scrap the currency in favour of the US dollar and the South African rand.

Zimbabwe's inflation soared to nearly 300 percent in August, stoking fears of a return to spiralling Mugabe-era rates that wiped out savings and made most goods unfordable.

Basics such as fuel, bread and medicine are hard to come by and their prices can rocket overnight.

Elected after Mugabe's ousting in November 2017, he pledged to attract international investors and revive a country once considered southern Africa's breadbasket.

But some observers are sceptical the new measures will resolve the underlying problem.

"These monetary changes do not affect economic production."

Bhoroma also pointed out that simply converting RTGS into cash would not address "the problem of money supply".

He said confidence in the market remained low and expected the impact of the news notes to be fleeting.

"After a few months we will go back to square one."

Covid-19 Lockdown: Jubilee House Empty As Workers Told To Wo...
30 minutes ago

Lockdown: ‘Stop Choking Market To Stock Up Food, We’re Not ...
32 minutes ago