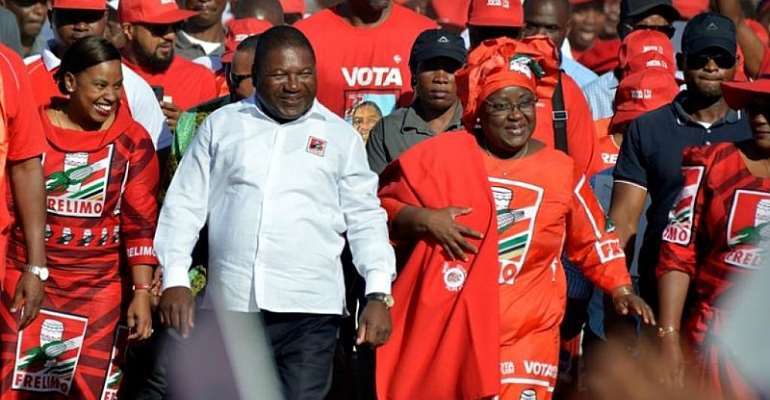 Filipe Nyusi  has scored 73 percent of the vote, against 22 percent for his challenger Ossufo Momade of Renamo, the rebel group turned opposition party, according to the results announced on Sunday by Mozambique's  electoral commission.

The Frelimo party, which ruled the conflict-prone country since independence in 1975,  took 184 seats in the 250-member house of the parliament.

This, while Renamo managed to return only 60 of the 89 lawmakers elected in the 2014 polls.

The commission led by Abdul Carimo, announced that voter turn-out was just about 50 percent of some 13 million who registered to cast ballots in the process.

Violent campaign
While Mozambican civil society observers found the results similar to their own tabulations, some admitted receiving reports of ballot stuffing, ghost voters on electoral registers and election monitors chased away from polling and vote.

This was while observers from the Southern African Development Community (SADC) ruled the run-up to the vote and the balloting itself as free and fair.

“The level of violence and corruption, which was very high during the campaigns, probably dissuaded people from coming out to vote," Domingos do Rosario, a senior program officer with the Maputo office of the Southern African Electoral Institute for Sustainable Democracy, (EISA), said

Irregularities
The political science professor with Mozambique's Eduardo Mondlane University also told RFI, that while his NGO cannot confirm all the allegations, their observers on the ground documented cases of "results sheets from some main polling stations which were not published".

“Observers were not allowed to assist in the counting, in the provinces of Nampula, Zambezia, Gaza, Sofala and Tete", Professor Rosario noted.

While the election results still need to be ratified by the country's constitutional court, the academic describes the verdict as a disaster for the August 6 2019, peace accord signed by Mozambican President Filipe Nyusi and Renamo leader Ossufo Momade, to end four decades of relapsing civil conflict.

The accord lays the groundwork for decentralization and for a process of reintegration of Renamo fighters into the national army and police force.

Renamo leader in hard sell
“Momade was naive to accept to join this peace process, before the elections”, argues Professor Domingos do Rosario.

“He should have withheld his signature, waited until he found out how the election would be organized, before signing the accord”, Rosario explains.

“He did the opposite, signed the accord and can no longer say I will withdraw from it”, Professor Rosario went on.

“It's very complicated for Ossufo who now has to explain his decision to hardline members of Renamo who opposed the deal in the first place”, he added.

According to the researcher, the big challenge now for Ossufo Momade is to first go back and reunite his fragmented party, before returning to see if Frelimo is willing to make any concessions to the “weakened” Renamo leader.

Frelimo went into these elections facing serious questions about the integrity of its leaders.

That was in the wake of a 1.8 billion euro "hidden debt" scandal which sparked the worst financial crisis ever faced by the country.

No one has yet been prosecuted over the scandal which is believed to have scared away donors and investors.

Economic boom
But President Filipe Nyusi's second term could become a miracle for the economy.

The country is preparing to produce more than 12 million tons of liquefied gas every year after the discovery of one of the world's largest reserves off the northern coast of Mozambique.