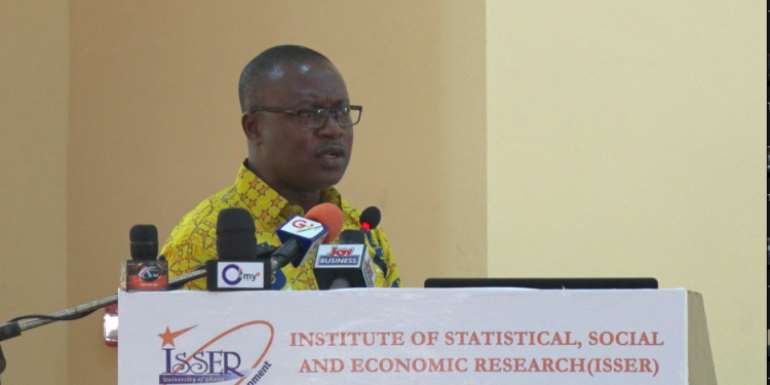 A Senior Research Fellow at the Institute of Statistical, Social and Economic Research (ISSER) at the University of Ghana, Dr. Charles Ackah says the government needs to take a critical look at some of its expenditures in the face of a domestic revenue shortfall.

The government has over the past three years introduced several initiatives such as Free SHS, Nation Builders Corps, Planting for Food and Jobs among others in fulfillment of some campaign promises.

Speaking at ISSER's launch of the 2018 State of the Ghanaian Economy and the 2019 Mid Year Review, Dr. Ackah explains that the government needs to review its spending as a number of the new initiatives don't add to growth.

“We are asking the government to look at efficiency on the expenditure side and prioritize efficiency. We have seen that the government is sacrificing capital expenditure for goods and services. The capital expenditure is needed for growth…as this is the money that goes into infrastructure development etc. Government is rather spending money on so many initiatives…if you don't have enough resources, shouldn't we begin to discuss the Free SHS program and look at whether it should be free for everybody or whether we should go and do proper targeting and support the poorest households”

Shouldn't we begin to discuss some of the Ministries we have and see whether we still need them? For instance the Ministry for Inner City and Zongo Development, what are they doing and what value are we getting for the resources. Can those issues be tackled by the MMDAs without necessarily having a Ministry? The kind of expenditure they are making there, are they growth-enhancing,” the ISSER Senior Research Fellow added.

In its review of the 2019 mid-year budget, Dr. Ackah who is also Director at Center for Social Policy Studies at the University of Ghana said Ghana's economy, projected to grow at 6 percent, is on the decline from a high of 8.1 percent in 2017.

Last year, the economy could only grow at 6 percent. With the government missing its first-half revenue target by GHS5 billion, Dr. Ackah stated that it is time to reprioritize its spending as more borrowing could lead to more interest payments.

This year alone, the government is projecting to pay as much as GHS19 billion in interest payments on its borrowings.