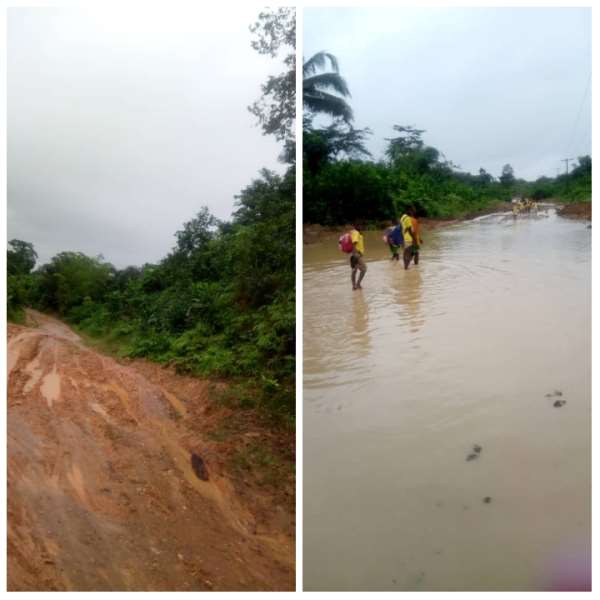 Barring any last minute hitches, government will commence works in two months time to improve the bad nature of roads in Gwira.

The cocoa growing area has struggled over the years with dilapidated roads.

But, Minister for Roads and Highways Mr. Kwesi Amoako Atta on July 2019, cut sod for the construction of the deplorable roads in the Gwira Aiyinasi-Gwira Eshiem enclave in the Nzema East Municipality of the Western Region.

Unfortunately, work on the project has not commenced following the sod cutting.

This deplorable road network has been claiming many lives since 1974, according to community members and has been crippling the local economy of the area.

The area, known for its agricultural potential, remains predominantly a cocoa growing area.

The Chiefs and people there have been complaining as to why the project has been delaying since the sod cutting.

In this regard, the Member of Parliament for the area, Catherine Afeku led over thirteen (13) Chiefs from the area to visit the Department of Feeder Roads in Accra over the weekend to ascertain why the construction has been delaying.

Addressing the Chiefs, the Director of Department of Feeder Roads, Engineer Bernard Badu, thanked them for their time to visit the Department to do a follow-up on the project.

He, therefore seized the opportunity to assure them that within two months time, the contractor assigned to the project, would be on site to start construction activities.

He disclosed that following the sod cutting activity, the contractor has not visited site to start the work because of procurement processes.

He said "We are sorry for the delay, but after the sod cutting, we have to come to Accra to work on the documentation of the project, that is why work on your road has delayed, but for now everything is set and next two months the contractor would be on site, so let us exercise patience".

He reiterated that the contractor would complete the construction within 24 months time.

Meanwhile, the Chiefs and people in the Gwira area, have appealed to government to construct a steel bridge over the Ankobra River at Gwira Wiawso.

They explained that the bridge, when completed would help them when they want to travel to Prestea-Huni Valley Municipality .

In response, the Director said the Department would visit the River to do a feasibility studies and inform government about it for the work to be factored into the road project.

On his part, the Chief of Ampasie Nana Kojo Mensah II, thanked the MP for leading them to do a follow-up on the road.

He said the road network was in very terrible state and used the opportunity to appeal to government to expedite action on the road.

He said the only means of transportation to the place was motorbike, adding that pregnant women were being carried on motorbikes before reaching hospital to deliver when they find themselves in labour.

He commended government, while observing that no government has attempted to construct the road for them.

He said if this Government was able to construct their road, they would reward the NPP by voting massively for President Akufo-Addo and the MP, Hon. Catherine Afeku.

The Chief disclosed that this was the first time a sitting Member of Parliament has led traditional rulers to Accra to fight for development for their area.

On her part, the Member of Parliament for the area, Catherine Afeku bemoaned how the road network had given problems to residents living there.

She said since 1974, no government has worked on the Gwira road network.

Catherine Afeku assured the Chiefs that the current government would not disappoint them.

She charged the Department of Feeder Roads to support the contractor to be on site as as soon possible.

She discloses that President Akufo-Addo would visit the Gwira area to perform another ceremony for commencement of Community Mining in November 2019.

In this regard, she appealed to Department of Feeder Roads to let the contractor be on site before arrival of the President.

She appealed to the Chiefs to be in touch with the Director of Department of Feeder Roads for more updates about the construction work.

The 34-km stretch is being executed by Fridoug construction limited under the supervision of Department of Feeder Roads.