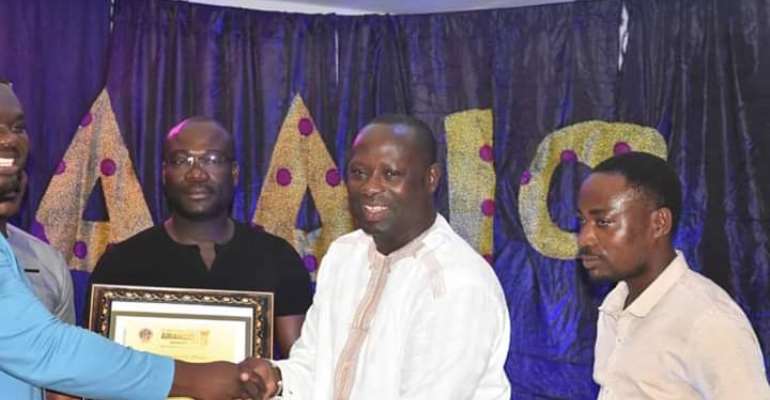 The Member of Parliament (MP) for Ellembelle, Emmanuel Armah Kofi-Buah, has been adjudged the best political leader in Western Region.

His leadership qualities was acknowledged by Fontomfrom Empire, organizers of the maiden edition of Fontomfrom Amandze Awards carefully developed to reward communal and social excellence.

The former Minister for Petroleum and nine other awardees received heartwarming citations from the organization.

The citation signed by the Chief Executive Officer (CEO) of Fontomfrom Empire, Eva Sheita Kumah, read "We appreciate all your effort to help the youth and society at large. We are grateful for your unraveling contributions and your commitment to the development of the capacities of the young people, organizations and nation.

"You have been an icon and a mentor in every way. Indirectly, you have inculcated greatness in most people and anyone that comes your way can testify to that. You have done more than it is expected. For not helping only just the community you belong, but everyone you meet. We appreciate your presence and would forever be honoured for your good work done to the society and community at large."

The lawmaker, who is currently the ranking member on Trade and Industry in Parliament, received the citation with loud smiles depicting excitement.

In his remarks, he promised to do more to help his constituency, region and the nation at large.

Armah Kofi-Buah described the recognition accompanying the award, as inspiring especially when it had to come from his own region, to define his performance in government, leadership and service to humanity, and in capping his hardwork in the country.

He challenged leaders in the country to constantly apply the qualities required in fulfilling their mandates and social contract with the Ghanaian people.

According to the MP, Ghana must succeed at all cost through the contribution of all Ghanaians.

Under the circumstance, he appealed to Ghanaians to brighten the corner where they are or find themselves.

The GNPC Foundation, which has been carrying out social intervention projects and programs to improve the livelihood of Ghanaians, also received two awards, whilst the Executive Director Dominic Eduah personally won an award for his dedication to community development.

Diana Adjei, Chief Executive Officer of Aseda Foundation, who was one of the three winners of this year's MTN heroes of change also won an award at the coveted event.

For Connect FM, the station received an award for nurturing community relations with its flagship program "Omanbapa".

Madam Abiba Fuseini, the woman rescuing mentally ill patients in Sekondi Takoradi, also gained recognition for playing an instrumental role that is keeping the oil city out of the troubles of lunatics. For her award, she was named responsible citizen (Omanbapa) of the year.

In an address, she appealed to Ghanaians to eschew indiscipline, and instead cultivate love and compassion as vital qualities required for national cohesion and development.

She assured that although she has spent 12 years in the service of transforming lunatics, she would continue to do that to protect them against evil plotters.

She appealed against deceptive use of black magic (juju) by Ghanaians to cure lunatics.

In his speech after receiving the award, he recalled the visit to Takoradi in 1999 when he gained admission at Takoradi Technical University (TTU) which was then a Polytechnic, and eventually ended up staying and becoming an entrepreneur.