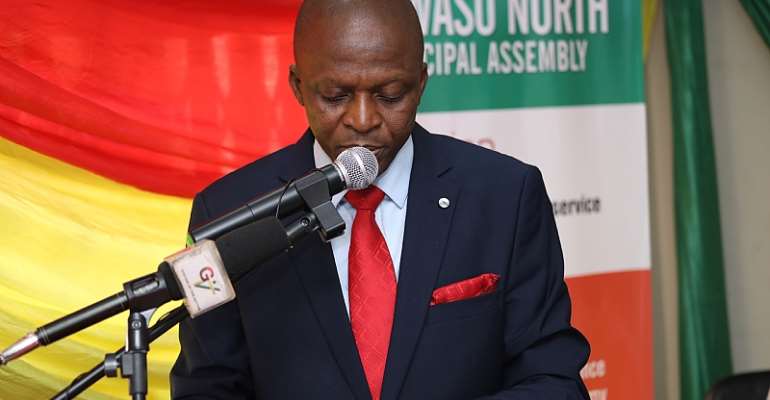 As part of measures to tackle the sanitation menace and President Akufo-Addo’s vision of making Accra one of the cleanest city in Africa, the Municipal Chief Executive Officer (MCE) of Ayawaso North Municipal Assembly, Aminu Zakari says it has successfully delivered 500 out of the 800 waste bins to registered households in the community.

According to him, the move comes after the Municipal Assembly signed onto the 'One Million Bin' project dubbed “One Household, One Bin”.

Addressing the media at a Meet-The-press series in Accra, Hon. Zakari said, “In furtherance to the President’s vision being spearheaded by the MCE, the Assembly has revisited and revived the ‘SamaSama’ concept by embarking on weekly inspections and sanitation throughout the Municipality to summon and fine people who violate the Sanitation Bye-laws”.

He added that the exercise which comes on every Thursday with the support of Staffs of the Assembly, NABCO Trainees as well as National Service Personnel has resulted in a cleaner community.

Hon. Zakari noted that the Municipal Assembly is screening some residents who have volunteered to be sanitation watchdogs i.e ‘Ayawaso North Voluntary Sanitation Taskforce’.

He further mentioned that the Municipality is benefiting from 3 Institutional Toilets under the One Constituency, One Million Dollar Programme.

“Two are sited at Accra Girls Senior High School, whiles the remaining one is being constructed at the Kotobabi Police Station. Construction of 3 boreholes under the One Constituency, One Million Dollar Programme has seen one in each electoral area”.

The MCE revealed that under the leadership of President Akufo-Addo, the Municipal Assembly has rolled out some programmes and projects in various sectors including Education, Health Security, Agriculture, Nation Builders Corps, MASLOC among others.

Speaking on Education, the MCE said “A six-unit dormitory for the Accra Girls Senior High School which is funded by the GETFund is underway. Renovation of 12 Unit 2 Storey Classroom Block and Construction of Block Wall Fencing around Unity Cluster Schools are part of the interventions to improve the standard of education”.

Hon. Zakari noted that the introduction of the Free Senior High School programme has increased the number of students from 563 to 711 in the first year of its inception.

He added that a number of 898 pupils has been recorded following the introduction of ‘Double Tracking System’ of which 434 are on the ‘Green Track’ whiles 464 were for Gold Track.

He noted that a second batch comprising of 430 pupils for both ‘Green and Gold Tracks’ are still yet to be enrolled.

According to Hon. Aminu Zakari, the Assembly has in collaboration with the Scholarship Secretariat has offered scholarships to 32 students pursuing various Diploma, HND, Degree and Masters Programmes in Tertiary Institutions.

“Our Municipal Assembly has also supported 28 needy but brilliant students by paying their fees. We hope to do more in the next academic year”.

Touching on Health, the MCE emphasized that in collaboration with the Municipal Health Directorate, it is embarking on promoting quality healthcare in the Municipality through certain projects.

He noted that the ‘Renovation works, construction of 3 Storey Doctor’s Bungalow and construction of Disability friendly walkway at the Maternity Block at the Mamobi General Hospital are ongoing projects.

On Agriculture, he noted that the Assembly is strongly collaborating with the Ministry of Food and Agriculture to acquire farmlands outside Accra to invest in the skill using labour from the Municipality since it is 100% urban with no land for its people to engage in cultivation.

“Under this rearing for Food and Jobs, we have registered 15 farmers and awaiting supplying of cockerels from the Ministry of Food and Agriculture. The Assembly is also in the process of acquiring 3 structures for the training of 3 youth groups in rabbit rearing” he noted.

The MCE stated that the 225 trainees attached to the Municipality have been assigned to various departments and Units of the Assembly.

He stressed that, “the ANMA has 2 receptionists, 14 with Statistics and 9 are with the Finance and Revenue departments among others”.

The Municipal Chief Executive of Ayawaso North Municipal Assembly called on the general public especially residents of the Municipality to come out in their numbers on December 17, 2019 to the polls to elect Assembly Members and Unit Committee Members.

“People should join the voting on the referendum day to decide whether the election of MMDCEs should be on partisan basis or not”.

He challenged residents living in the Ayawaso North Municipal Assembly to support the ideas and work together with the MCE in achieving a better Municipality.

“The MCE has done a lot for us and I believe when we retain him, he will work harder and Ayawaso North Municipal Assembly will be the best in the country,” he emphasised.