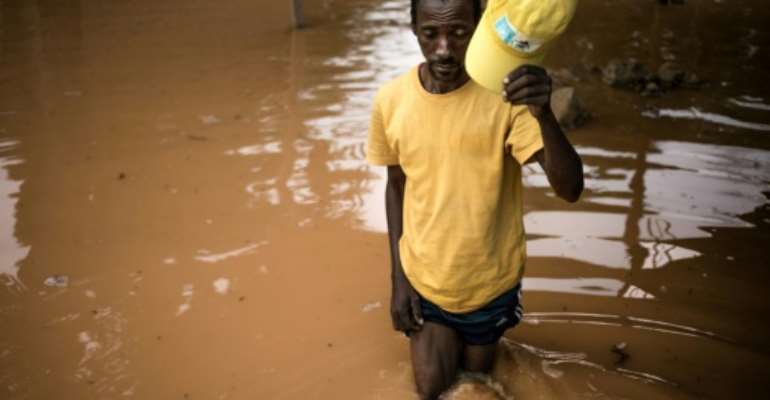 Fisherman Edouard walks among the flooded ruins of his house in Bangui. "I don't have the money to rebuild it," he said. By FLORENT VERGNES (AFP)

The Central African Republic was already struggling with a humanitarian crisis. Then the floods came.

Ten days of torrential rain have plunged swathes of the country underwater, creating a new emergency in one of the world's poorest nations.

The country's largest river, the Oubangui, burst its banks in the deluge, leaving tens of thousands of people homeless in the worst floods in decades.

The normally busy streets in the seventh district of the capital Bangui have been submerged, with the daily racket of trade and taxis giving way to the quiet swish of canoes.

Dozens of residents perched on a small outcrop of land to look out on the devastation: drowned fields in which only the sodden tops of ruined crops can be seen above the water.

Many Central Africans watched the mud walls of their homes melt away with the floodwater, leaving only barren frames. By FLORENT VERGNES (AFP)

Many watched the mud walls of their homes melt away with the floodwater, leaving only barren frames.

Edouard, a fisherman, lost his house four days ago.

"I don't have the money to rebuild it," said Edouard, who has since taken refuge at a neighbour's home along with his parents.

"We need to be able to shelter families and wait for the water to go down. This is going to last at least until the end of November."

Fishermen like Edouard have dealt with flooding before -- the Oubangui overflows every decade. Floods in 1999 caused major destruction, but locals say this time is worse, fed by exceptionally heavy and prolonged rains.

Shoes float in what was once a living room of a house in Bangui. By FLORENT VERGNES (AFP)

"This flooding is greater than in 1999," Central African Red Cross president Antoine Mbao-bogo told AFP. "Even in towns of the north and centre, it's raining heavily."

"Add to that the deep poverty of our compatriots."

The government has not yet given a death toll, but the Red Cross said the flooding has left at least 28,000 people homeless.

The Central African Republic has been mired in a brutal civil war since a coalition of rebel groups overthrew the government of President Francois Bozize in 2013.

Dozens of residents perched on a small outcrop of land to look out on the devastation. By FLORENT VERGNES (AFP)

The conflict has forced nearly a quarter of the country's 4.7 million people to flee their homes.

More than two-thirds of the country is controlled by militias fighting the government or each other.

The United Nations estimated in September that two thirds of the population depends on humanitarian aid to survive.

In a downstream village near the capital, around 150 residents have been forced to take refuge in a disused warehouse, with no roof other than some meagre tarpaulin, for almost a week.

"The flood destroyed all our homes. We saved the canoes and some clothes," said fisherman Jean Bosco.

"Everyone suffers because of the mosquitoes. We have nothing to eat. We men can endure it, but the children..."

For some fishermen, the flood washed away their livelihoods as well as their homes.

The Red Cross estimated the flooding has left at least 28,000 people homeless. By FLORENT VERGNES (AFP)

"We lost everything. We cannot even fish -- our nets were washed away," said Fleury, a fisherman.

Red Cross's Mbao-bogo told AFP that the priority was to relocate those in need. But the country's slim resources are already stretched far too thin.

"We don't have the infrastructure to shelter people, but we expect that NGOs will provide tents and shelters," he said.

"Drinking water is lacking. There are problems with latrines, mosquitoes, cold and the risk of epidemics such as cholera," he said in a television address.

In the capital Bangui, with a population of about one million, mud homes have literally dissolved in the floods. By FLORENT VERGNES (AFP)

"This situation could last and even get worse."

In the flooded neighbourhoods of Bangui, sewage has mixed with the rising water.

"In the water that passes here, there is refuse, garbage -- it may cause cholera!" Jeanne Koussa said in front of the stinking brown tide threatening her home in the seventh district.

Health Minister Pierre Somse confirmed there was a risk of cholera.

"The water is rising, hygiene devices have disappeared, people are crammed into underdeveloped sites -- it will all further aggravate the problem," he said.