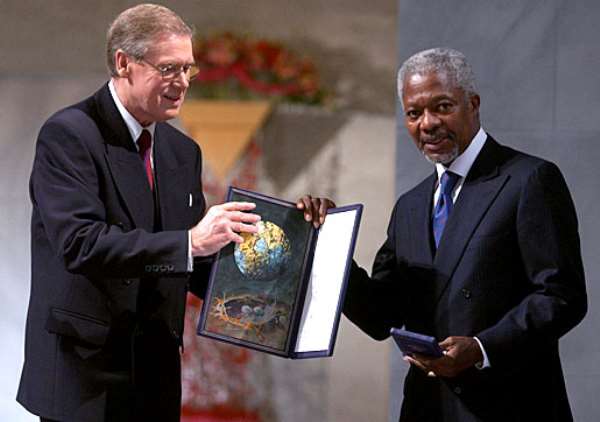 The 2019 Nobel Prizes in all categories have been announced. It is, arguably, a collection of the world’s most prestigious prizes. As usual, Africa will be poorly represented among the winners who collect their prizes in Oslo and Stockholm in December.

This year, Africa’s only entry will be in the category in which it has done well – the Peace Prize. Africa’s haul of the Nobel Peace Prize is impressive. Africans have won ten of the Peace Prizes in its 118 year old history. The first African to win the Peace Prize was Albert Luthuli in 1960. He was then President of the African National Congress. 18 years later in 1978, President Anwar Sadat of Egypt shared the prize with Menachem Begin of Israel. Desmond Tutu, Secretary-General of the South African Council of Churches, won it in 1984. In 1993 South Africa's anti-apartheid leader, Nelson Mandela, who became the country's first democratically elected president, shared the prize with Apartheid President F. W. de Klerk.

Our own Kofi Annan received the prize in 2001, sharing it with the UN which he then led. Three years later (2004) Wangari Mathai of Kenya was awarded for her work for the environment. In 2005 Egypt's Mohamed ElBaradei, head of the UN's nuclear watchdog, won the prize with the International Atomic Energy Agency (IAEA). In 2011, Ellen Johnson Sirleaf, President of war-ravaged Liberia, shared the prize with peace activists Leymah Gbowee and Tawakkol Karman from Yemen. Last year, Denis Mukwege of war-torn Congo and Nadia Murad jointly won it “for their efforts to end the use of sexual violence as a weapon of war and armed conflict”. And this year, Abiy Ahmed Ali, Prime Minister of Ethiopia, was chosen as winner.

Whereas ten Africans have won the Peace Prize, only ten persons of African origin have won a prize in the other five categories put together. These are: Medicine 3 (all white South Africans); Literature 4 (two white South Africans, one Arab and one black); Chemistry 2 (one white South African and one Egyptian); Physics 1 (Algerian). No African has ever won Sveriges Riksbank Prize in Economic Sciences in Memory of Alfred Nobel instituted by the Swedish Central Bank (the oldest central bank in the world) and first awarded in 1969.

It is clear that the prize that is relatively easy for Africans to win is the Peace Prize. We do not do well in the hard sciences – those that are directly linked to the material improvement of humanity. Only one black African, Wole Soyinka, has won a Nobel Prize that is not a Peace Prize. In 1986, he won the Prize for Literature - a “soft subject”.

The Jews, on the other hand, constitute only about 1% of the world’s population, but have won 20% of all Nobel Prizes in all categories but mostly in the Sciences.

There is a backside to Arica’s “good” performance in the Peace category. It is an indirect reflection of the continent’s parlous state. We are still a continent that is not at peace. Amidst all the chaos of wars, insecurity, dictatorships, hunger and poor governance, it is easy for a few do-gooders to stick out and win the Peace Prize. This is not a thing we should really be proud of as Africans.

The Peace Prize is awarded by the Norwegian Nobel Committee and presented in a ceremony in Oslo a day before the Stockholm event. Norway was in political union with Sweden when Alfred Nobel wrote his famous Will (“Nobels testamente” as the Swedes call it).

The Peace Prize is the most controversial of all the Nobel Prizes especially when it is awarded to an active politician. For instance, many people are not sure that Barack Obama deserved it which has made “even” Donald Trump to believe he deserves one too! The Nobel Committee itself admits to the controversial nature of the prize and has a long article on the subject on its website.

This year’s prize to Abiy is not without controversy. He was given the prize for his peace initiative with Eritrea and his efforts in the Sudan crisis. But the two conflicts look far from being resolved. The country he leads is not even truly at peace with itself.

But he has won the prize and it will not be taken away from him. This year’s prize money has been set at 9 million Swedish kronor (about 1 million dollars) for each full award. Abiy won the Prize alone so he will pocket the whole amount and a medal that can be worth lots of money in the collectors’ market. When Africa rejoices over his prize, we should not forget that it is the most controversial and, perhaps, the weakest prize.

Some people argue that since the Peace Prize is so controversial, the Oslo Committee can decide, as it did during the War Years, that in certain years, no one in the world is worth it and not award it. But this will not happen. The money is there and must be given out every year. It is also a huge ego thing for Norway – a small, rich, peaceful and well run country that must struggle to be heard on the world stage.

Even though the bookmakers put odds on the winners in each category every year, it is difficult to predict who eventually wins which prize. The public is not even told the shortlist which could give an indication of future winners. But one thing is certain about the future: an African is more likely to win the Peace Prize than the prize in any of the other “more difficult” categories. As an African, this does not really make me proud…