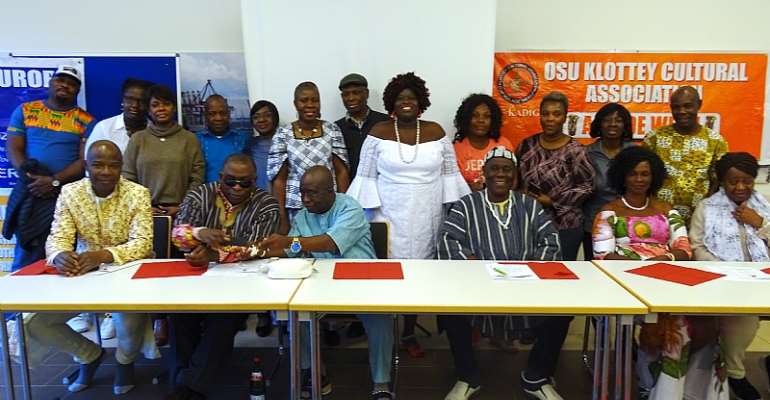 GaDangme unions under the umbrella association GaDangme Europe united on the 18th October 2019 in Hamburg, Germany as done yearly to hold their Annual General Meeting.

Unions and individuals came in numbers to get things done together to move the GDEu association to the next level. The theme of this year´s conference is to transform challenges facing GaDangme into reality.

Indeed GaDangme Europe has proven to be a union who keeps to her words as great progresses and good intentions have been made to push the GaDangme land forward.

Results on projects carried out were introduced by the President Mr. Alex Adjei. The next steps to be taken on these projects were intensively discussed with all present members.

A project running where GaDangme Europe has a cooperating partner is the skills training project in Asesewa regarding hair dressing and also supporting an effective education in the Asesewa Community ´A´ Basic School. GaDangme Europe is hereby in cooperation with the Ga-Adangme Women Development Association located in Asesewa.

GDEu is also working together with GaDangme International (GDI) as well as the Yei Henumo Kpee in Accra on various projects. These include a Ga Literacy class in Ga Mashie at the Freeman Methodist Church at Bukom with 45 pupils and also in Ngleshie with 25 adults.

Previously, on the 4th August 2019, GaDangme Europe and GaDangme International donated school items such as exercise books, pens and pencils, etc. to the Freeman Methodist Church at Bukom, Accra where the Ga Literacy class is been held.

Sanity plays a big role in the life of each human, most of all in a community. GaDangme Europe (GDEu) has therefore taken it as her responsibility to assist in cleaning the Osu beach.

A press conference was held with the Chiefs and Queens with respect to issues bothering people of the GaDangme clan situated in Europe when they look back to challenges their co-folks are facing back home. The topics debated are the clearing up of deserted areas in the GaDangme land, peddling GaDangme lands to foreigners, etc.

In relation to the press conference held, the Chiefs and Queens advised that people of GaDangme should give respect to their leaders as practiced in other Ghanaian tribes. They mostly criticized that that respect is an important factor GaDangme´s are lacking to move and promote the clan forward and also to grow together as one.

GaDangme Europe awaits you in the year 2020 with further spectacular projects and activities with the goal to make the GaDangme land a better place.

Trade Minister’s promise to open Komenda Sugar factory ‘a me...
40 minutes ago