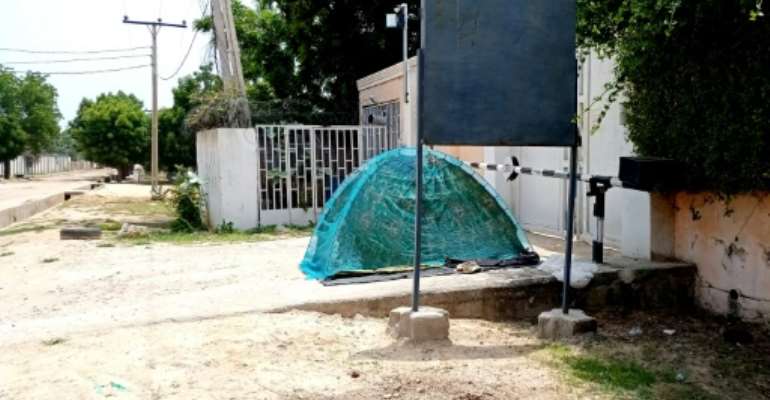 The barred entrance to the Maiduguri offices of the Mercy Corps humanitarian group which the Nigerian army closed in September. By AUDU MARTE (AFP/File)

Falmata Ibrahim is at a loss on how to feed her family as she sits by the makeshift shelter they have called home since fleeing Boko Haram five years ago.

Like hundreds of thousands of others displaced by the decade-long insurgency, she has relied on monthly support worth around $50 dollars from international aid groups to get by.

But that lifeline was cut when the Nigerian army shuttered the offices of humanitarian organisation Action Against Hunger (ACF) in the region some six weeks ago.

"I don't know how I will survive with my children," she told AFP at the camp where she lives in the city of Maiduguri.

Without warning in September the military moved in and closed down the offices of ACF and a second NGO Mercy Corps in northeast Nigeria.

Soldiers surrounded their compounds in trucks and demanded staff leave the premises.

After shutting its offices, the military accused Paris-based ACF of "aiding and abetting terrorists and their atrocities" by supplying food and drugs to the jihadist fighters.

The NGO denied the charges and, along with Mercy Corps, called for the army to reverse the closure.

The United Nations says stopping the work of the aid groups has left nearly 400,000 people "without food and other essential help for the last month".

During a visit to Nigeria, the UN's humanitarian chief Mark Lowcock said on Friday he had received assurances the suspension would be lifted in the "next few days".

A spokesman for the Nigerian army refused to comment on the UN statement.

Representatives for the humanitarian organisations told AFP that they had no more information.

While the uncertainty drags on, it is the victims of the conflict who continue to suffer.

Ten years of fighting has killed an estimated 35,000 people, spilt into neighbouring countries and forced millions from their homes.

The UN says this year alone 140,000 people have been displaced by renewed violence and more than three million people are food insecure as farmers have been unable to plant crops.

Soldiers near the shuttered offices of the NGO Action Against Hunger in northeast Nigeria, a region devastated by the Boko Haram insurgency. By AUDU MARTE (AFP/File)

The Nigerian army is struggling to contain the insurgency that has seen the jihadists split into rival factions.

The army has pulled back its soldiers from forward operating bases into so-called "super camps" as part of a new strategy, but residents say that has left swathes of territory unprotected.

Those displaced by the fighting live by their thousands in sprawling camps studded around the region.

Very few have any stable work and the government provides almost no support.

Aid workers on the ground insist that now is the time for additional support -- not barriers -- to tackle the humanitarian catastrophe.

"Today, the population of northeast Nigeria and humanitarian organisations seeking to care for them need more support than ever," Doctors Without Borders (MSF) said in a statement over the weekend.

"We must urgently and collectively reassert the fundamentals of humanitarian action, and to protect the right of any individual in need to receive assistance."

For the displaced living hand-to-mouth around the conflict zone, the hope is that the authorities will allow the two aid groups to reopen soon.

Already the situation is extremely difficult and it will only get worse if the suspension of aid drags on much longer.

"I am in a deplorable condition," said father-of-nine Jakanama Ali.

"I don't have any means to provide what we need."