ISD Officers Trained On Information Dissemination For Referendum In Sunyani 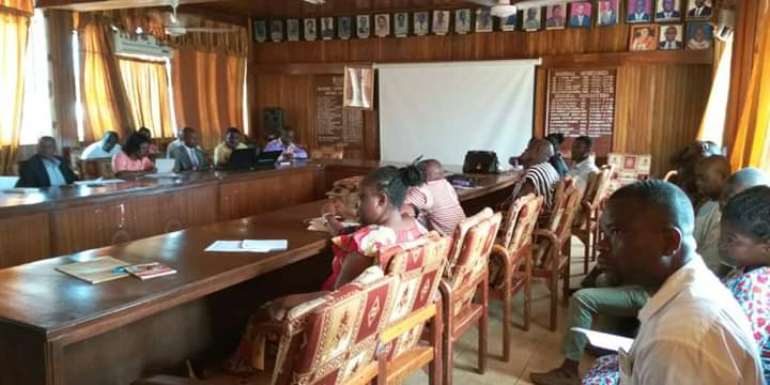 A training workshop has been held in Sunyani for District/Municipal Officers and Commentators of the Information Services Department/Ministry of Information for the dissemination of information on the upcoming 2019 District/Local Level Elections and the Referendum to amend Article 55(3) to allow for multi-party participation in local level elections.

The workshop was aimed at preparing the officers in the Bono, Ahafo and Bono East Regions on the legal technicalities of the exercise in order to streamline and design an appropriate public campaign message and communication strategy in a bid to carry out effective public sensitisation and vigorous publicity on the Referendum to achieve the expected results.

As the official mouthpiece and public relations organisation of government with the main aim of ensuring successful implementation of all government policies for full participation and benefit of the citizenry through public education, the goal of ISD in this electoral exercise is to rally the populace to ensure at least 40% voter turnout and 75% "YES" votes on Tuesday 17th December, 2019 being slated for the elections.

The successful amendment of Article 53(3) of the 1992 Constitution would allow all political parties to mount platforms, campaign, sponsor and nominate candidates to contest in District/Local level elections such as Assembly Members and Unit Committee Elections just as in the Presidential and Parliamentary General Elections.

This would also pave way for the elections of Metropolitan, Municipal and District Chief Executives to end the Constitutional sole prerogative power being exercised by the President of Republic of Ghana and all subsequent governments in the appointment of MM/DCEs.

In a keynote address delivered on his behalf by the Chief Director Samuel Kwaku Gyimah of the Bono Regional Coordinating Council, the Deputy Regional Minister Siaka Stevens urged the ISD Officers to once again demonstrate their enviable professionalism with a deep sense of experience and expertise as the monopoly giant in public relations and public sensitisation on government policies.

He stressed that government still relies on ISD's feedback and public reaction reports for policy reformulation and retargeting to improve the economic life of the people.

The Regional Directors of the Information Services Department (ISD) for the Bono, Ahafo and Bono East Regions Imoro Ayibani Tebra, Maxwell Kombat and Paul Desmond Tutu respectively, in turns took the Officers through the practical orientation and strategies for the dissemination.

The Regional Directors announced that the people across the Bono, Ahafo and Bono East Regions should expect to see the ISD Vans and Crew soonest in their vicinities.

As part of the strategies, ISD Cinema Crew would mount the famous Information Vans as usual to visit communities and alcoves as well as Community Information Centres (CICs) of all districts to interact with the people, an activity the Department is popularly known for.

The Regional Director for the Electoral Commission Frank Nunno noted that they had already recruited and trained electoral officials and organized electoral materials as part of their preparedness for the exercise.