From Russia With Love: Wake Up Or Make Way? 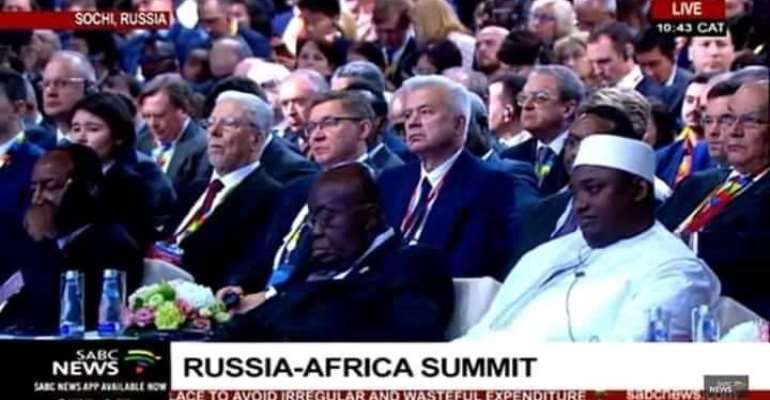 Blame it on SABC! The image gone viral internationally bears the imprint of the network. The editors could have spiked that portion of the news to save a highly respected sister African country from embarrassment, but then, rumour has it that it may have been done, even if subliminally, to show that their former President was not the only one who could turn a Summit into a napping opportunity.

Let me play the proverbial Devil’s Advocate: Can we trust that it is genuine? With fake news hogging the headlines these days and photoshop images popping up to give the impression of verisimilitude, we just cannot be sure.

If I can take minds some years back, either in the late PNDC era or the beginning of the 4th Republic, a photograph claiming to show Flt. Lt. Rawlings chilling away in Switzerland popped up and created such a sensation. It showed an individual with quite a healthy virile physique cooling it off in a swimming pool. The picture looked authentic and we jumped into conclusions about the man’s double standards enjoying himself in Europe while lying to the rest of us about an Economic Recovery Programme that demanded our belt tightening! It was however disputed by official sources as a fabrication, put together by some mischievous technical savvy opponents of the former airman to score cheap political points! I do not now remember how that one played out…

A confession: As editor of a newspaper, I once received what I thought was a scoop from a US source, showing what was purported to be Mr. Bosomtwi-Sam, now deceased MP for Sekondi and a member of that year’s Ghanaian UNGA delegation, fast asleep at the UN. The individual had all the features of the late Sekondi MP, including the greying hair around the forehead. I rushed to print and was most embarrassed when the real victim called me to complain. He was a Bosomtwi-Sam lookalike alright, a senior journalist at GBC who was taking a well-deserved nap during a break in proceedings and some mischief making European or American journalist had snapped his colleague from Ghana and decided to share and poke fun at us! With as much artificial stutter I could muster, the apologies flowed…Later it became the source of standing jokes between him and myself – a happy ending! Another image, even funnier, was that of Nana Akwasi Agyeman (Okumkom), the maverick boss of the KMA who somehow had been included in the Ghanaian delegation to another UNGA. The picture showed him, head thrown back, eyes closed, mouth open and faaaast asleep, this time in the chamber of the Assembly during a session! So many years down the line, can’t still hold back my amusement.

And now we have this sleeping image from Russia engaging us. Look, as for sleep, we all succumb to it one way or the other, so it is not unusual to nod off at the most unlikeliest of places, like this friend of mine who could go into deep slumber within the hubbub of a nightclub! For myself, I realise that the older I am becoming, the more prone I am to enjoying a nap wherever or whenever an opportunity offers itself – a “lie-in” a la John Lennon and Yoko Ono is how I describe it to my family and they have come to accept my lie-ins as non-negotiable…

But that’s all the devil’s advocacy I can play. The Sochi image is neither a fake nor a mistaken identity. It was the man himself, representing Ghana at this crucial Russo-African engagement. The French, Chinese, Japanese, Turks, all have similar engagements with Africa, which are taken extremely serious by all participants – that is why this Sochi nap is occupying much media and public attention.

And there is a telling contrast: The young and obviously vibrant Gambian Head of State in his white resplendent African look, sitting alert with a smile playing on his lips – a smile of amusement at this napping Ghanaian or just the joie de vivre of being at the Summit? We will never know. Why then would the leader of the Ghanaian delegation be caught napping so publicly on the job? Something punishable in the civil/public services of Ghana. The nap could have been brought on by boredom, tiredness from jet lag, or some health* problem.

I have heard some people say he was not sleeping at all but simply in a relaxed mode of droopy eyelids and slack lower lip giving the impression of sleep! Well, whatever it was, the real import of this important multilateral gathering is lost, due to this unfortunate image of the leader of a national delegation sleeping – I am told there are others at other events. Within the multilateral platform were bilateral meetings in which Ghana for example, expressed the willingness to work towards increasing trade with Russia…US$20 billion worth of trade, but who is discussing that now? Truly, a picture speaks louder than words.

Some nagging national concerns though: with these recurrent sleeping bouts, is he or he is not capable of continuing in the high office he thrust upon himself, seeing as general elections are only a little over a year away? Some think he is not and that a succession plan by his political party should be triggered.

And this is only thinking aloud – should such a plan be triggered, would they have room for Dr. Mahmoud Bawumiya? Again conventional wisdom, does not seem to suggest such an outcome possible, Nana Addo-Dankwa Akufo-Addo himself being one of the main architects of the no-automatic-promotion of an incumbent Vice President policy and also the “Akan leadership” principle of the party. Or, and this is another shot in the dark, would he take a page from his bosom pal, Rawlings’ Swedru Declaration and announce Bawumiya as his hand-picked successor?

Another issue arising from these sleepy episodes with regards to the future is that the Akufo-Addo and Alan Kyeremanten rivalry has simply been put on hold because of the constitutional power the NPP is now exercising but if for one reason or the other – especially health* – Nana Akufo-Addo has to make way, all the factions would take to the mattresses and prepare for a shootout. Let us not forget the inconclusive presidential primaries in which Mr. Kyeremanten was prevailed upon not to push for a runoff, making Nana Akufo-Addo winner without constitutional mandate of 50% plus one... All these will bubble to the surface as potential successors line up with their claims. Speculative permutations because of sleep, sweet sleep. It’s going to be fun and games!

In functioning democracies, it is in the public interest to discuss the health status of political high flyers, celebrities in show business, sporting “heroes” and just about anyone who gets by on taxpayer expense or citizen’s discretionary spending. It would be recalled that the late President Mills, marked by the illness that was later to claim his life was asked by a journalist at an Osu Castle media encounter to comment on his own health status. With much dignity and humour, he obliged. Recall also how a leading private newspaper once published a front page picture of the long suffering Mills (at the hand of the newspaper) and then proceeded to give its own medical analysis?