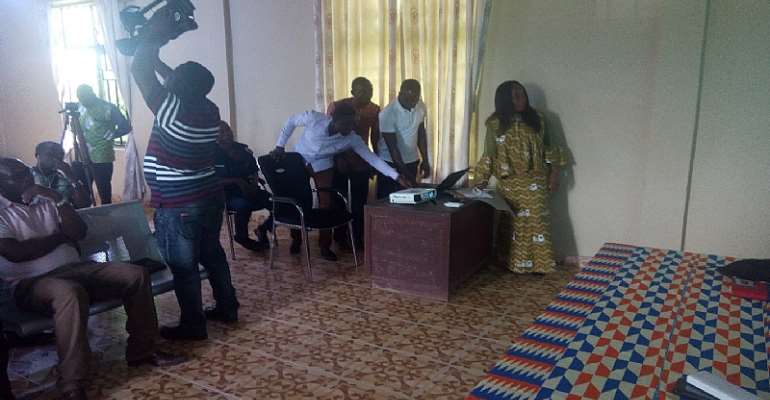 The Tain District Assembly in the Bono region has held its maiden Meet the Press with the District Chief Executive Madam Charity Akua Foriwaa Dwommoh announcing that all government flagship programmes and interventions are progressing steadily in the District.

Giving an overview of the Assembly’s performance under President Akufo Addo led government, the DCE said under the government’s One Village, One Dam policy, the District is a beneficiary of Ghana Productive Safety Net Project (GPSNP) which five communities namely, Yabraso, Seikwa Tainso, Degedege, Namasa and Debibi has been identified and work will soon begin in two of the communities.

She said under the government one constituency, one million dollars policy, three toilets with borehole is under construction at Atomfourso, Brohani and Yabraso, construction of Culverts on rivers at Kwaekesem road, Banda wai, Mfodwo and Apayeso and an Ambulance which the District will soon receive.

The DCE also disclosed that the Assembly took delivery of assorted agricultural inputs to boost food production and improve upon the living conditions of the people in the District.

She also added that the Assembly raised and distributed 136,000 cashew seedlings to farmers in the District under the Planting for Export Rural Development (PERD) policy which covers about 1,360 hectares of land.

She urged the citizenry to support the government since government is on course to deliver on its mandate.

Mr. N. Kumi Acheaw, the District Coordinating Director in his welcoming address said this was in fulfillment of a directive from the Ministry of Information aimed at creating a platform for the dissemination of information on the performance of the Assembly and government programmes and projects in the District level.

He said it was also to engage the citizenry to receive feedback on government programmes and projects in the district.