Instructors At POTS: My Unsung Heroes In The Ghana Prisons Service 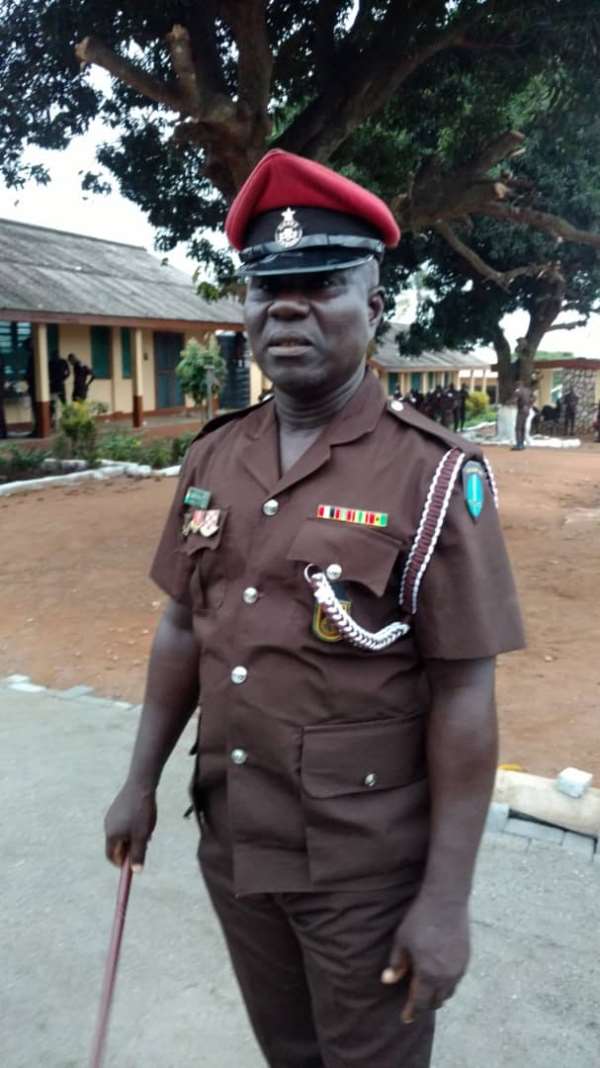 On 24th December, 2016 I was part of the 500 young men and women who were to go through a 9month rigorous training at the Prison Officers’ Training School (POTS); and that was where our formal names were changed to Recruit Officer or RO. Anything more than that was tantamount to the Senior Regimental Sergeant Major’s (SRSM) laid down joining rules.

The Prison Officers’ Training School was to be our home for the next 9months without calls, visits, and external food among other restrictions. We were oriented on the Dos and Don’ts governing the training school. The presence of the stern looking SRSM, thunderous voice and bearded DSM Awagah, experienced DSM Sarkodie, female but masculine hearted Sgt Ama Nyarko, alone will demoralize you from breaking any of the laws.

We were told the SRSM was going to act as our father and mother; so every issue should be channeled to him.

There’s a beautiful, green carpet grass area at the training school christened ‘Love Lawn’, which was out of bounds to recruits; the moment you’re seen loitering or even your shadow falling on that part; the SRSM will determine what should be done to your soul and it was no laughing issue.

You can never call yourself a full-fledge Prison Officer if you’re unable to grasp the foot and rifle drills. Drill Instructors such as DSM Ocansey who never took any kind of excuse from a Recruit, Heavy mustache and terific Sgt Seglah, DSM Michael Kuupiel, who’s Cliché was to tap on his beret or forage cap before doing his turnings made one love to be a Drill Instructor.

They did their best to take out civilian traits from you and make you smart, disciplined and regimentally capable to stand other colleagues from sister security agencies; national or regional parades.

The SRSM during my time at the POTS was SCO Isaac Kofi Sarkwah. This is a down to earth man who leaves his family and get to the training school as early as 6am to oversee training. His Drill prowess won him a lot of admiration and he has held the Drill front for the last 3yeras training other 3 recruit courses among two Cadet Courses.

He does all this marvelous Drill work with his indefectible team of Drill Instructors.

Until I reported at the POTS, I never knew one could be made to wake up at 2am to tidy up the environs with torchlight; this was because the Physical Instructors who don’t entertain laziness will be reporting to work at 3am to take us through various forms of rigorous exercises.

These are men and women who leave their spouses and report to work at 3am, whether rain or shine to come keep us fit for our 9month stay and after. No recruit or Cadet Officer loves a PTI simply because they deprive them of the luxury and comfort in sleep.

SCO Adotey will make you hear your heart speaking to you; Decorated SCO Quarcooe was on top of issues, SCO Gasu, was a mother among the PTIs but wouldn’t compromise on discipline. Other officers with the PTI caucus made our stay at the POTS very painful but always make us forget by consoling us with outdoor dawn jogging amidst back to back ‘jama’ songs.

These were the team of academicians who took us through everything we needed to know about the noble service hidden in books; especially from the 1992 constitution of Ghana and all other Prisons related paper documents.

Others may have their own reservations about these wonderful Instructors mentioned but mine is, we have not even celebrated or decorated them enough.

I am by this short write up, saying Tsoooo…boiee…Tsoooo boiee to all present and past Instructors of the Prison Officers’ Training School who have and still sacrifice their comfort to instill regimental discipline into recruits, Under Cadet Officers and Officer Cadets.

DISCIPLINE AND HARDWORK is our Motto!