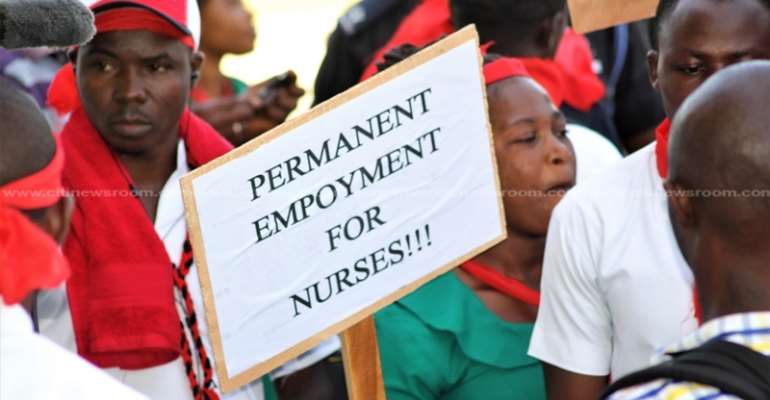 Angry unemployed Physician Assistants trained at the Kintampo College of Health say they are suspending their picketing at the Health Ministry upon the intervention by Deputy Minister of Health, Alexander Abban.

The physician assistants on Monday threatened not to leave the premises of the Health Ministry until they are given specific timelines on when they will be posted.

The about 40 physician assistants who graduated from the Kintampo College of Health in 2016 said several calls on authorities to post them seem to have fallen on deaf ears.

This situation, they say has negatively affected them hence their protest at the ministry to further drum home their demands.

Speaking on Eyewitness News, Joshua Adu Adjei, one of the leaders of the Physician Assistants said they have called off the action.

“The plan was to picket at the Ministry until posting comes but I will say that the Minister gave us his word and he is saying they have started working on getting clearance for us and that is why we left the premises. The minister said we have not met him in all our dealings and since we had met him he was going to take the matter up seriously and we hope he goes by his word so that things will go on well for everyone”.

Meanwhile, the Coalition of Rotation Nurses and Midwives for 2019/2020, say they are disappointed with government's handling of their concerns and would be forced to hit the streets if nothing changes within the next 7 days.

The Nurses held a press conference yesterday to register their displeasure over the non-payment of their mandatory allowances since their engagement.

The National Convener of the Coalition, Fabian Suta, told Citi News that they expect Government to act on their demands.

“The government has decided to be dormant in order not to respond to us. We are doing a lot of follow-ups but they are not responding to us, they actually called us to the ministry to have a discussion but it yielded nothing. As we have just held this press conference, we are giving them an ultimatum of 7 days to act on our demands and if they fail, we are going to embark on another level which might be a demonstration”.