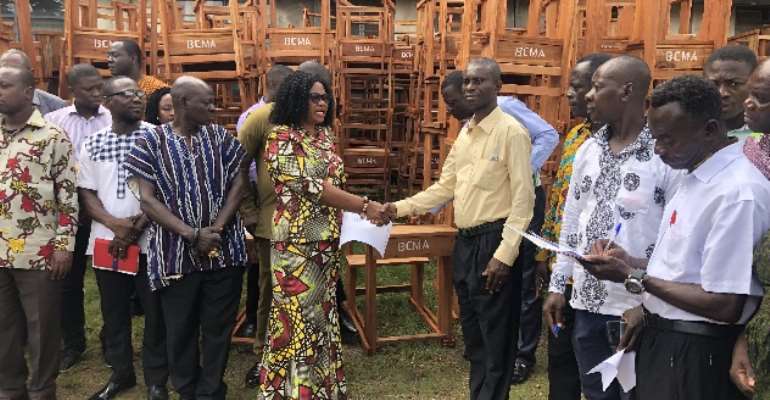 Over one thousand mono desks worth GH¢ 120, 000 has been procured and distributed to the sixteen (16) basic schools by the Birim Central Municipal Assembly.

At a short ceremony held before the presentation, Mrs. Victoria Adu, the Municipal Chief Executive (MCE) for the area indicated that education is dear to the heart of His Excellency Nana Addo Dankwa Akufo – Addo, the President of the Republic.

Against this background, she thanked the government for introducing Free Senior High School policy to ensure that every Ghanaian have access to affordable and quality education.

This according to her, would help improve quality education in the Municipality thereby giving students the opportunity to acquire skills and knowledge to enable them proactively deliberate on matters which are of national interest and find solutions to their problems at schools and homes.

Mrs. Adu said the presentation of the mono desks to the 16 schools would go a long way to also alleviate plights on some of the beneficiaries’ schools and hinted that Assembly would do all it can to support public schools to augment the efforts of government achieve the intent to which the Free Senior High School Policy was introduced.

Mr. Benjamin Cudjoe, the Municipal Education Director who received the mono desks on behalf of the schools, thanked the Birim Central Municipal Assembly and management of the Assembly for the kind gesture and informed the headteachers from the beneficiaries’ schools to put the desks into good use.

In another development, Mrs. Adu cut sod for the commencement and construction of three footbridges at Maderina and End Time Owusu Memorial.

These projects when completed would help to enhance movement of the residents, and improve the drainage system in the areas, thereby helping to reduce persistent floods.

She stressed that the salvation Armey classroom block which was part of the schools encompassing an office, storeroom, staff common room, toilet facilities and urinals and hinted that when it is completed, would address infrastructural deficits confronting the school.

She charged the contractor in-charge, Charley B. Enterprise to complete the project in the next six months.

High attendance on first day of parliament's 3rd meeting of ...
42 minutes ago