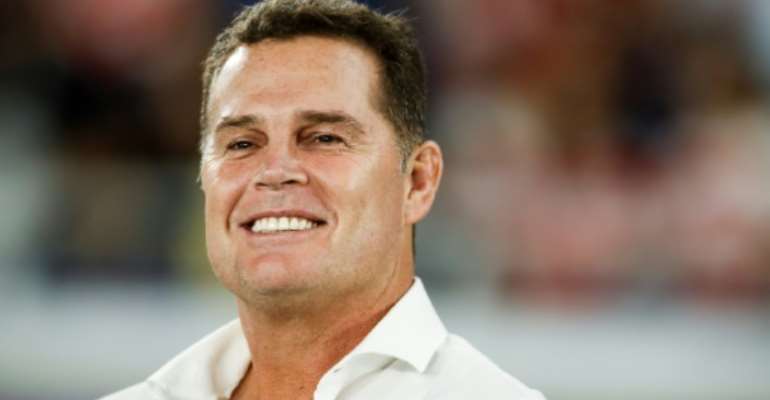 South Africa's head coach Rassie Erasmus says there will not be much change in the final. By Odd Andersen (AFP)

South Africa might have been criticised for their dull tactics at the World Cup, but coach Rassie Erasmus has promised more of the same in the final against England on Saturday.

The Springboks have employed a gameplan based around kicking for territory, a massive no-nonsense pack of forwards and a tough-as-teak defence that suffocates opposition sides.

While the likes of wingers Cheslin Kolbe, out injured for the 19-16 semi-final victory over Wales but likely back for the final, and Makazole Mapimpi have briefly shone out wide, the team's tactics mean much of the game is not a great spectacle.

"If one understands where we are coming from, being number sixth, seventh, eighth in the world, we've got certain challenges," Erasmus said Tuesday.

"One of them was always to redeem ourselves and become a power again in world rugby and try to get to number one or two.

"To do that, you've got to have some building blocks in place and we've followed a certain route and play according to stats and the way the game is currently being refereed, and what gives you short-term results on the scoreboard."

Erasmus added: "We certainly accept that there are some things in our game we have to improve and we take it on the chin and keep on improving that.

"We accept criticism but we are also happy to be in a position to compete in the World Cup final, which is where we ultimately want to be."

Erasmus said the Boks had "a full squad of all 31 players available and ready to play".

"We'll pretty much go with more or less the same team. We believe that's the way we can get best out of the team," he said.

"It is a bit horses for courses, but we also believe it's also our most fit in-form, best available and best combination team."

Erasmus insisted there were no mind games in revealing a potentially little-changed match-day 23 or in his comments on tactics.

"No, no bluffing!" the former Munster coach said. "It's probably exactly the same 23, with Cheslin Kolbe being one of the guys who comes into the match-day 23."

As for tactics, he said that the team would only train twice, for a maximum of 160 minutes.

"There's not a hell of a lot you can change in your tactics in two training sessions on a six-day turnaround. So you can expect pretty much the same from us on Saturday."

Erasmus expected England to be "brimming with confidence" after their 19-7 semi-final win over defending champions New Zealand.

He highlighted England's outstanding linespeed in defence, which cuts down on time and space, and deprived the All Blacks any access to their free-flowing, off-loading game.

"We've played England four times in the last two years and the score is 2-2," he said.

"Both teams have definitely improved since then."