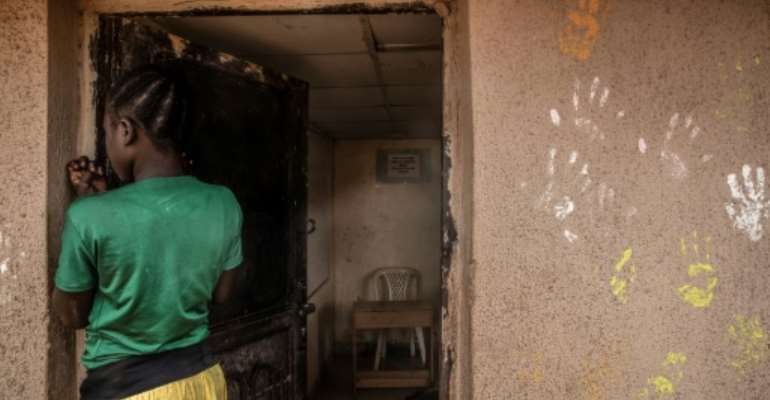 Displaced: A 12-year-old girl who fled the Boko Haram insurgency in northeast Nigeria to join Pastor Solomon Folorunsho's camp. She left the camp earlier this year and lives with her family at an informal site for displaced people. By FATI ABUBAKAR (AFP)

Deep in the tropical forest in southern Nigeria, an evangelical pastor runs a sprawling camp billed as a refuge for thousands of children who fled the Boko Haram jihadist insurgency in the north.

Solomon Folorunsho, known as Pastor Solomon, says he is on a self-proclaimed mission to help humanity, creating the International Christian Centre for Missions (ICCM).

His camp in Benin City claims to provide accommodation, medical care and education for 4,000 children, "most of them orphans", as well as 500 widows and missionaries, using funding from local institutions, NGOs and churches abroad.

But witnesses AFP interviewed across Nigeria -- children, their relatives, former missionaries and social workers -- paint a far darker picture of the pastor and the treatment of those in his care.

"At first he's very subtle, quiet -- like somebody who wouldn't hurt a fly," one former church worker said of the charismatic preacher.

"I loved him, I loved his charisma."

But during months of interviews, witnesses detailed how those living at his 30-hectare (75-acre) facility frequently go hungry and thirsty and endure atrocious hygiene conditions.

All accused the pastor of physical abuse, while some accused him of sexual harassment.

Pastor Solomon, aged in his 50s, admits having problems with food and sanitary conditions in the camp but denies any mistreatment.

"There is no bad treatment here. We don't do abuse," he told AFP.

"Feeding them is a challenge... but we don't have anything to hide. We are helping humanity."

Concerns about the camp have a long history. Three years ago, the UN children's agency UNICEF sent an assessment team to the site, who filed a report with damning conclusions.

"Pastor Solomon runs this camp as if it is his 'kingdom'. He controls the movement and actions of every person in the camp through a group of ministers and specially selected children," the team wrote in the confidential report, seen by AFP.

The UNICEF investigators said what they saw, coupled with interviews with children, caregivers and NGO workers, prompted "strong concerns regarding the possibility that Pastor Solomon may be engaged in sexual activities, or at a minimum, displaying grooming behaviours with girls in the camp".

Witnesses also told AFP that around a dozen young girls work for the pastor as his personal servants and receive preferential treatment.

"A girl who refused to work for him was punished and starved. When he beat you, he wouldn't stop until you bled seriously," said Rahila, a 16-year-old girl who left the camp several months ago.

"He had names that he called different girls... He would comment on the size of my butt, and he would say our chests looked like pineapples or stuff like that," she said.

All the witnesses' names have been changed to protect their identities.

Other children and adults said that those who upset the preacher were treated brutally.

"I was always hungry, there was never enough food or water. When we complained we got beaten with anything he could lay his hands on," said 12-year-old Hauwa.

"No one leaves Pastor Solomon without a scar -- whether it is psychological or physical," a former follower told AFP after hesitating at first to talk about his ordeal.

Convincing people to talk about their experiences with Pastor Solomon is a painstaking task. Some have refused to speak out for 20 years.

"Most of the girls were coming from poor homes. They would sleep with him and in exchange he would pay for their school fees," said a former female follower who was at the church in the late 1990s.

Children and witnesses have complained of maltreatment, hunger and illness at the camp. By FATI ABUBAKAR (AFP)

She said her going to the authorities about the abuse she experienced and witnessed was out of the question in a country where powerful men are rarely brought to justice.

She was also scared of juju, the traditional black magic widely feared by people in the region.

"I was scared to talk. He uses juju, people told me I would die."

"He says he's sent by God. To confront him is like confronting God himself," a former church worker said.

Those who have served under him and lived in the camp say the pastor uses the fear of devil to keep people in line.

On the church's website, in a short biography entitled "I Saw Jesus" -- translated into six languages including Russian and Chinese -- he claimed that he was saved from Satan by God himself.

Pastor Solomon's International Christian Centre for Missions has expanded hugely since he founded it in 1990 with just a dozen young female followers.

In 1992, he set up the first "Home for the Needy", taking in poor children whose parents entrusted them to his care on the promise of an education.

A former missionary said the pastor would sometimes misrepresent the children as orphans to raise sponsorship in Europe or the United States.

Ten years later, the church had grown to more than 200 branches, with missionaries and preachers working across southern Nigeria and funds coming from evangelical churches abroad.

"He was always browsing the internet to look for church organisations all over the world" to target for donations, the missionary said.

"He would send pictures of us or of the children, asking us to look sad. He was saying that white people are so emotional."

But it was the Boko Haram jihadist insurgency more than 1,000 kilometres (600 miles) to the north of Benin City that caused a surge in the numbers at the camp.

As the violence displaced millions of people and grabbed global attention in 2013, Pastor Solomon's group turned its attention to children in the conflict zone of northeastern Nigeria.

"The pastor's people came (to Maiduguri) and convinced parents to send their children to Benin City where they would have a good education, with free food," said Rakiya, who allowed five of her six children to go.

"At the camp, parents would be given bags of rice, bus fare, jerrycans of palm oil and the like. So when they returned to Maiduguri they would tell other parents 'Benin is good'," she said.

No records are publicly available about how many children were brought from northern Nigeria to the camp.

Pastor Solomon told AFP that the Nigerian army and the intelligence service "have a copy of the register", but this could not be verified.

UNICEF and the International Committee of the Red Cross (ICRC) wanted to set up a programme to reunite children from the camp with their families, but were denied access to their identities.

"At this time, camp management has been unable/unwilling to provide this information," UNICEF said in its report.

UNICEF maintains that it passed on the report to local authorities in 2016 to make them aware of the "concerns".

But nothing appears to have been done.

On the contrary, Pastor Solomon had full support from the then regional governor, Adams Oshiomhole, now head of Nigeria's ruling party, the All Progressives Congress.

Pastor Solomon has admitted to problems in providing food at the camp but denies any mistreatment. By FATI ABUBAKAR (AFP)

Today, while denying any accusations of maltreatment, the pastor admits that the huge influx of children placed a major strain on the camp and that the church struggles for money.

Camp workers have told local media that to feed the estimated 4,000 children and 500 adults at the camp costs hundreds of dollars a day -- and that does not include medicine, water, education and clothing.

"We also have a problem with hepatitis, measles, chickenpox and scabies; we don't have enough accommodation for them, this is a big challenge," the pastor acknowledged.

Witnesses said that children sleep on mats on the ground in huge hangars without adult supervision, relieving themselves in the forest, complaining of hunger and thirst and not washing, and that many have died in the disease-ridden conditions.

While conditions keep deteriorating at the camp, some European and US evangelical groups still send donations and materials to Nigeria.

The congregation of German pastor Gunther Geipel -- who describes Pastor Solomon as a "friend and brother" -- is one of them.

Geipel dismisses the allegations against the pastor as "tales" from "jealous people".

"I cannot imagine that this is true," he told AFP.

AFP put the allegations against Pastor Solomon and his camp to Edo State minister for social affairs Maria Edeko, who took up her duties several months ago.

She said she had never heard of the UN report or accusations of abuse and poor conditions at the camp but insisted they would be investigated.

She confirmed the authorities did not have access to the camp registry.

"From now on, I can assure you that my ministry will be on top of the situation. We need monitoring," she said. "It's our responsibility."