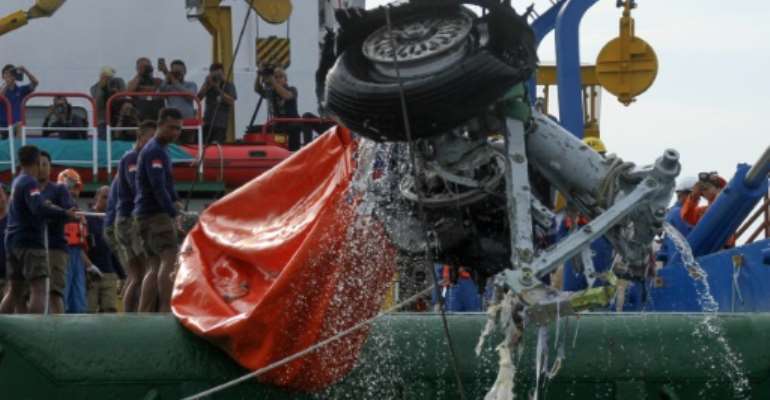 An Indonesian rescue team is seen lifting a pairof tires from the ill-fated Lion Air flight JT 610 off Karawang in the Java Sea a few days after the October 29, 2018 crash. By AZWAR IPANK (AFP/File)

When Muilenburg hung up, the Boeing chief executive thought he had the backing of the US leader. But the next day, Trump announced that Boeing's top-selling plane was "grounded effective immediately."

Boeing's entire global fleet of almost 400 MAX planes has stayed out of service ever since, plunging the 103-year-old aerospace giant into the biggest crisis of its history.

The situation has raised questions about Boeing's commitment to safety and corporate culture while also tarnishing the company's image as it continues to compete with archrival Airbus.

The crisis has cost Boeing billions of dollars and spawned numerous investigations by US authorities, as well as a lawsuits from victims' families.

Next of kin attempt to identify personal items of loved ones who were on board the ill-fated Lion Air flight JT 610 a few days after the October 29, 2018 crash. By BAY ISMOYO (AFP/File)

The crisis actually began months earlier on October 29, 2018, when a MAX operated by Indonesian carrier Lion Air plunged into the Java Sea.

"Boeing blamed the pilots immediately in Lion Air, and then bungled the response thereafter," said Scott Hamilton of Leeham News, an aviation publication.

"Boeing's stubborn resistance to admit its mistakes -- even as those mistakes have delayed the return to operation of 737 MAX planes -- are turning this into a disaster for the company and its customers," said Jim Hall, former chairman of the US National Transportation Safety Board (NTSB).

"These items were connected to each other. If one of them was not occurring on that day, the accident may not have happened," said Nurcahyo Utomo, an investigator with Indonesia's National Transportation Safety Committee.

If the investigation showed Lion Air's pilots to be young and untested, it also revealed them to be in the dark about the MCAS, which was not mentioned in Boeing's flight manual.

The system has also been implicated in the Ethiopian Airlines crash.

The MCAS was developed specifically for the MAX to guard against stalling that could be caused by the plane's heavier engines.

The system was activated shortly after takeoff in both flights based on an incorrect sensor reading. The error stemmed from an angle of attack sensor that was approved for service by Xtra Aerospace, a Florida company that had its repair station certificate revoked by the FAA last week.

The pilots in two crashes were unable to regain control of the plane from MCAS, in part because the system was designed with no redundancy to that single sensor.

A report last month from the NTSB said Boeing and the FAA misjudged how pilots would respond to multiple alerts and alarms as they encountered trouble when flying the 737 MAX.

Another report earlier this month from a panel of global regulators concluded the FAA lacked the manpower and expertise to evaluate the MCAS.

A few days after the Lion Air crash, the FAA sent a directive to MAX operators about the risk of a faulty angle of attack sensor while Boeing developed an upgrade to the MCAS.

However, Boeing was still working on the correction at the time of the Ethiopian Airlines crash five months later.

Since the accident, Boeing's conduct during the development of the MAX has come under scrutiny, particularly on the question of whether it cut corners to launch the MAX quickly.

In the spring of 2011, American Airlines, which had previously bought exclusively from Boeing, warned the US company that it was considering a large order with Airbus for the A320 neo, a fuel-efficient version of a model that competed directly with the 737.

Boeing was told it must quickly come up with a rival to match the A320 neo to avoid completely losing the order, a source told AFP.

Recognizing that launching an entirely new model would take years, Boeing instead opted to update the 737, a line first launched in 1968 and which had been last modernized in 1997.

To speed the process, Boeing wanted "the minimum change to reduce costs and get it done quickly," former Boeing engineer Rick Ludtke, who worked on the MAX cockpit, told The New York Times.

But one in three Boeing employees reported feeling "potential undue pressure" from managers during the period when the MAX was developed, according to an internal survey reviewed by AFP.

Boeing added the MCAS to boost handling of the MAX, which had bigger engines than earlier 737 versions, even as other parts such as the fuselage and the landing gear were identical to older models.

"The final version was an example of trial-and-error and compromise, rather than design and production optimization," said an industrial source.

In its promotional materials, Boeing assured airlines that pilots familiar with prior 737 models required no significant additional training to fly the MAX, according to material described to AFP by congressional staff.

That purported similarity of the MAX to earlier versions also speeded the regulatory process.

Boeing was so confident of its stance that it agreed to give Southwest Airline a rebate of $1 million per-plane if simulator training was needed, a source told AFP.

After a series of simulator tests, Boeing pilot Mark Forkner maintained to aviation regulators that the MCAS would activate only in rare cases and would not require supplementary training.

But just before the certification, Forkner told a colleague that the MCAS was operating unexpectedly during a simulator test, according to text messages released by a congressional committee.

"So I basically lied to the regulators (unknowingly)," Forkner said in the text message.

The FAA, which allowed Boeing to leave the MCAS out of flight manuals, has itself come under sharp criticism over its certification of the MAX, particularly its handling of a program that delegated elements of the certification to Boeing.

While Boeing has acknowledged mistakes in its communication with regulators, it has pushed back against suggestions that the MAX suffered from design flaws.

"Boeing has established that the design and development of the 737 MAX was done in line with the procedures and processes that have consistently produced safe airplanes," a Boeing spokesman said.

The company has reduced production of the MAX by about 20 percent as it works to win recertification of the plane.

Boeing has submitted to the FAA documentation on the upgrade to the MCAS, which includes two angle of attack readings and the ability for pilots to shut down the MCAS if there is a disagreement between the sensors.

But uncertainty continues to hang over the MAX, including whether Boeing will meet its target date to win regulatory approval this year.

One outstanding question is whether pilots will be required to undergo simulator testing of the new system, a step favored by European and Canadian regulators that the FAA has said it believes is not necessary.

Dennis Muilenburg remains chief executive, but was stripped earlier this month of his title as chairman.

Muilenburg is set for two days of scrutiny on Capitol Hill beginning Tuesday, in a series of hearings that could determine whether he stays chief executive.