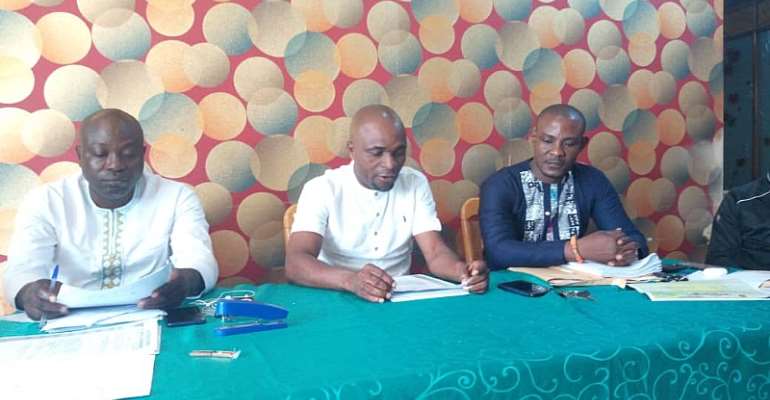 The Old Student Association of Akatsi Senior High Technical in collaboration with the Parents and Teachers Association (PTA) is calling for the immediate transfer of the schools' current headmaster Mr. Dickson Amemazior over what they describe as gross incompetence since assuming office.

They have given the relevant authorities a 7-day ultimatum to transfer the headmaster or they will take matters into their own hands.

The angry group intimated that they will cause citizen’s arrest of Mr. Amemazior if he is not transferred from the school once the 7-day ultimatum is exhausted.

According to them, the two and a half years the headmaster has spent in the school has drastically seen its decline in all areas. Whiles, they accuse him of mismanaging the administration of the school, they say they are saddened by how the schools' performance in the WASSCE has gone down under his watch.

At a press conference in Accra on Monday, October 28, 2019, the president of the Old Student Association, Mr. Reuben Abledu explained, “Before the assumption of office by Mr. Amemazior, AKAST was rated the best Senior High Technical School in the Volta Region; which gave us a high sense of pride, but just two and half years into the tenure of Mr. Amemazior, we can’t tell the position of the school and many of us would not like to associate with our own school anymore”.

He added that the abysmal performance of the school which saw just 33 out of 533 students passing for admission into tertiary institution compelled the Traditional Authorities of Akatsi to conduct an investigation into the matter.

Mr Abledu noted that at the end of the exercise, their findings informed them that the headmaster was the contributing factor to the low performance and hence must be transferred.

He indicated that information from members of the School’s PTA indicates that some part of the school is without electricity exposing the girls' in the dormitory to attack from miscreants and wild animals.

Mr Abledu insist that Mr. Amemazior has not taken any action to solve the numerous challenges of the student and has also refused to collaborate with the relevant stakeholders to help find solutions.

“Mr. Amemazior has destroyed the future of many young people who have gone through AKAST already and we cannot sit aloof and allow him to continue in that manner, as these people have already planned to revenge.

“We are by this press conference serving notice to the authorities that be that we cannot guarantee the safety of Mr. Amemazior in the school and the town as the Headmaster of the school, Mr. Reuben Abledu said.

He furthers stressed, “If by seven (7) days from today the Headmaster is not transferred from the school, we shall mobilize onto the streets of Akatsi, the over fifty thousand members of the old students, in addition to parents, teachers, students and all well-meaning citizens of Avenor/Akatsi and its surroundings to protest the presence of Mr. Amemazior in the school in a series of protests which shall be constant until the INEPT and INCOMPETENT Amemazior is removed from the school”.

The Old Student association has lineup up several drastic measures that they will undertake if the government, the Ministry of Education, or the Ghana Education Service does not take action after the deadline day.

Below are some pictures provided by the Old Student Association to show some bits of the bad conditions of the girls dormitory.

Akufo-Addo is sleeping on the job, he’s a failure – Ofosu Am...
51 minutes ago