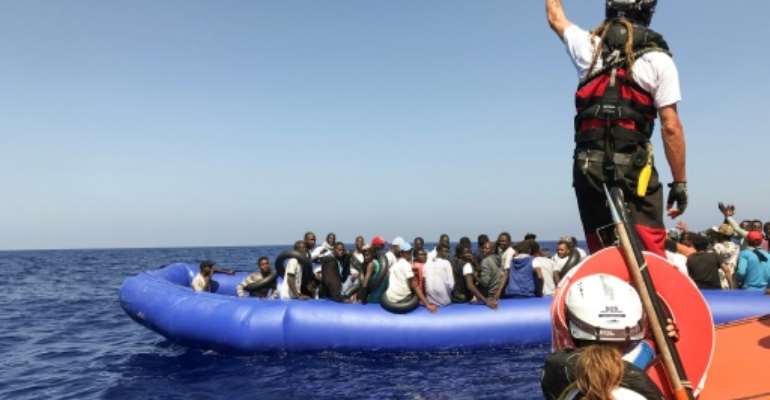 The crew of the rescue ship 'Ocean Viking' regularly go to the aid of the makeshift vessels attempting the dangerous Mediterranean crossing to Europe. By Anne CHAON (AFP/File)

Aid agencies on Monday appealed to EU leaders for a more coordinated response to receiving migrants, as rescue boats sought safe havens for more than 200 people saved from the Mediterranean.

Doctors without Borders (MSF) and SOS Mediterranee, which runs rescue patrols in the Mediterranean, called for a permanent system to replace the current "one-off" and "ad hoc" solutions.

"Today, 104 survivors are once again left in limbo on the deck of a rescue ship with no solution for their disembarkation in sight," said Louise Guillaumat, Deputy-Director of SOS Mediterranee's operations.

Rescue boat the Ocean Viking rescued 104 people from a rubber boat in distress off the Libyan coast in October 18, said the statement. They included two pregnant women and 41 children -- most of them unaccompanied.

Every patient treated in the MSF clinic had either suffered or witnessed violence or sexual violence at some point in their journey, said MSF Head of Mission, Michael Fark.

"Women have told our medical team they fled their home countries because of forced marriage, female genital mutilation or sexual violence," he added.

The Ocean Viking was charted by SOS Mediterranee in partnership with MSF.

The Ocean Viking, which has been sitting off the Libyan coast for 10 days, has already contacted Italy and Malta asking for a safe haven.

And as well as the Ocean Viking's passengers, German rescue boat the Sea Eye is looking for a safe port for its passengers. It saved 90 migrants who got into difficulty in the Mediterranean on Saturday.

The agencies' statement referred to plans discussed earlier in October by some EU states to run a pilot project for six months to develop a disembarkation system respecting international law.

"The situation currently faced by the Ocean Viking shows how fragile the announced EU disembarkation pilot project is," said Guillaumat.

"This situation has lasted for too long."

Contacted by AFP, the European Commission said it was not actively involved in the situation at this point.

A preliminary agreement reached in late September between France, Germany, Italy and Malta to avoid rescue vessels being stranded at sea was not yet operational, said the Commission.

It said 13 EU member states had taken part in the last technical meeting on the subject.

Contradictory reports emerged from the last EU meeting on the subject as to how many countries were prepared to cooperate in this area.

According the UN refugee agency the UNHCR, migrants passing through Libya to get to Europe suffer appalling conditions in a country that has descended into chaos since the 2011 fall of Moamer Kadhafi.