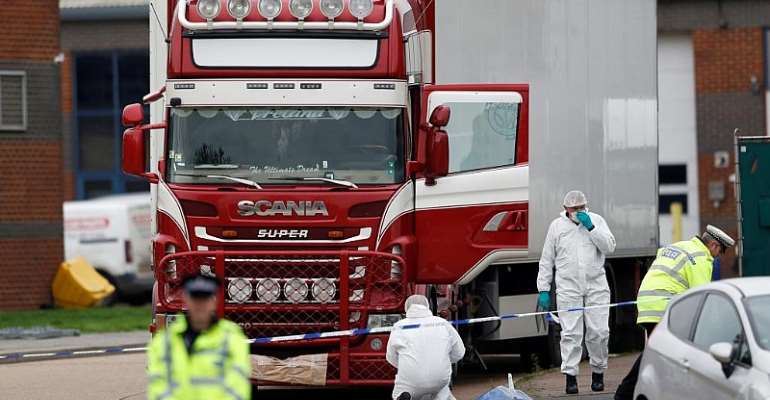 The driver of a truck in which 39 people were found dead appeared in a British court via video link on manslaughter and people-trafficking charges on Monday, as Vietnamese families of suspected victims spoke of their despair.

Driver Maurice Robinson appeared in Chelmsford Magistrates' Court via video link. The 25-year-old, wearing a gray sweatshirt, spoke only to confirm his name and address.

“This involves a global ring facilitating the movement of a large number of immigrants into the UK,” prosecution lawyer Ogheneruona Mercy Iguyovwe told the court. She said that other suspects were still wanted.

Plunged into despair
Robinson made no application for bail. He was remanded in custody until 25 November when the case will continue at the Old Bailey, London's Central Criminal Court, and he will enter a plea.

The driver was arrested shortly after the discovery of the bodies in the early hours of 23 October a few kilometers from the English port of Purfleet. The container had traveled from the Belgian port of Zeebrugge.

“The whole nation and indeed the world has been shocked by this tragedy, and the cruelty of the fate that has been suffered by innocent people who were hoping for a better life in this country,” British Prime Minister Boris Johnson wrote in a book of condolences.

“We mourn those who have lost their lives. Our thoughts are with their families far away.”

British police initially said the 39 dead were thought to have been Chinese but it later emerged that many were from Vietnam, where communities have been plunged into despair.

Travel back in time
The suspected victims hail from Vietnam's northern rice-growing areas of Nghe An and Ha Tinh, two of the communist-ruled nation's poorest provinces. Some families prayed their loved ones would still be found safe and sound.

“If I could travel back in time, I wouldn't have let him go this way,” Hoang Thi Ai, mother of Hoang Van Tiep, 18, who is feared among the dead, told Reuters news agency. “I clean his room every day with the hope that he wasn't in that deadly truck.”

Police have said very few of the victims were carrying official identification and that they hope to identify the dead through fingerprints, dental records and DNA, as well as photographs from friends and relatives.

The Vietnamese government said Britain had sent dossiers regarding four of the people found in the truck, seeking help in identifying them.

Deputy Foreign Minister Bui Thanh Son told reporters: “The ministry of foreign affairs is developing dossiers of possible victims, but until now there have been no grounds to confirm Vietnamese nationals are among the victims.”