NCL Orders TUTAG To Call Off Strike After Successful Meeting 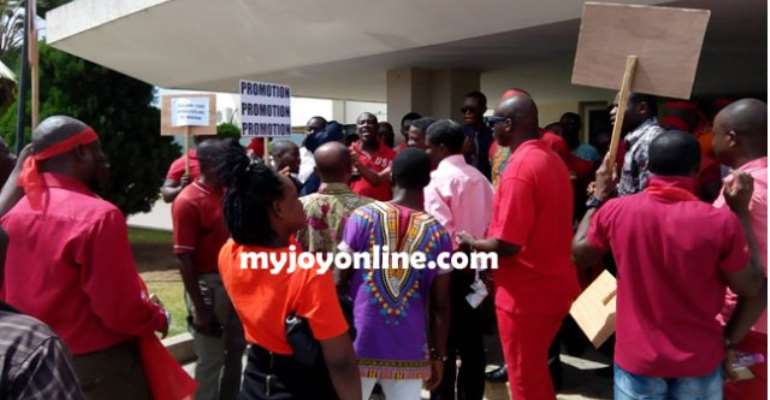 The National Labour Commission (NLC) has asked the Technical University Teachers’ Association of Ghana (TUTAG) should call off its strike with immediate effect.

This follows a meeting mediated by the NLC between TUTAG and other stakeholders in the employment industry.

The ministries of Education, Finance, Employment among others, representing the employers, have also been ordered to pay technical university teachers allowance that covers their electricity, rent, security, off-campus and car maintenance, according to a press statement issued by the NLC.

“The responsibility, entertainment, and fuel allowances shall be paid to deserving office holders in December 2019,” the press release stated.

Members of TUTAG have been on strike since October 7, 2019, after emoluments due them were not released despite a directive from the Ministry of Finance to the Controller and Accountant General’s Department.

The three-week continuous industrial action by TUTAG and the recent indefinite strike also declared by the administrators brought technical education across the country to a standstill.

Students in some of the technical universities have also held various protests to impress upon the government to meet their teachers’ demands and ensure that they return to class to enable academic work to resume.

Students in some of the technical universities have also been holding various protests to impress upon the government to meet the lecturer’s demands and ensure that they return to class to enable academic work resume.

An earlier meeting between Government and representatives of TUTAG ended inconclusively, hence, the intervention of the NLC.

NLC added that “parties are strongly advised to negotiate and act in good faith at all times”.

Read the press statement below: