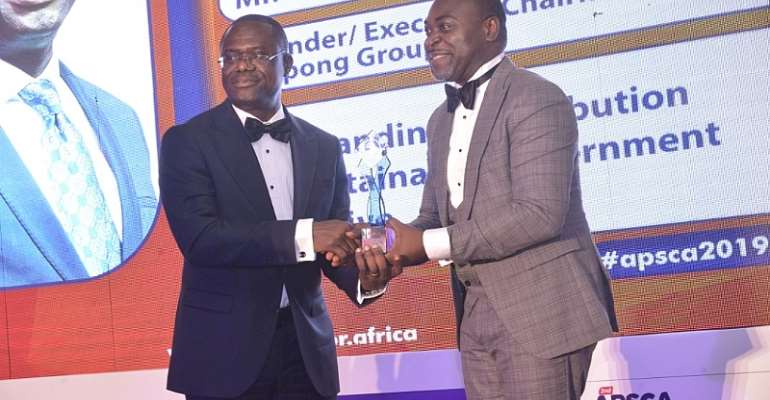 The Africa Public Sector Conferences and Awards (APSCA) has awarded the Jospong Group of Companies (JGC), the Executive Chairman of JGC and Zoomlion Ghana Limited, Dr. Joseph Siaw Agyepong and the District Common Fund Administrator Naa Torshie Addo among others at its Second Africa Public Sector Awards night in Accra.

The APSCA initiative is aimed at encouraging public sector participants to improve on their lot across the sub-region.

Vice President of the Republic of Ghana, H.E Dr. Mahamudu Bawumia, the chief host of the event addressed the people under the theme “Enhancing Public Sector Efficiency through Digitization”. He underscored the need for the digitization initiative undertaken by the government to be implemented within the public sector zealously. He said this will yield the needed results of bringing efficiency in the public service delivery.

Dr. Bawumia urged public servants to put the interest of the public in their service delivery and support the government’s digitization drive within the public sector.

Receiving the two awards, Dr. Joseph Siaw Agyepong, the Executive Chairman of the Jospong Group and Zoomlion Ghana Limited, who was also named the recipient of the Outstanding Contribution to Sustainable Government Initiative Award expressed his delight for the recognition given to the Jospong Group for its immense contribution to Ghana’s development agenda.

He dedicated the awards to the over 200,000 hardworking staff of the Jospong Group and the general public for their unflinching support in growing a Ghanaian group of companies to compete at the global stage.

Dr. Agyepong pointed out that the Ghanaian private entrepreneur is passionate and determined to effectively contribute to Ghana’s sustainable development initiatives hence the need to support local firms to lead the country’s developmental agenda.

Jospong Group of Companies, a successful diversified Ghanaian holding company was the proud recipient of the prestigious Excellence in Public-Private Partnership Award.

The award was in recognition of the Jospong Group’s outstanding service, innovation and tireless efforts in building strong partnerships with the Ghanaian government and service to the masses.

The JGC is a diversified holding company in Ghana with operations in other African countries and Asia. The company has a business interest in about 12 sectors of the economy with its biggest operations in Waste management, ICT and banking as well as the automobile and equipment.

Established in 1995, as a printing press, the company has since its inception experienced phenomenal growth and now has operations covering diverse sectors with over 40 companies with a focus on delivering quality services and products using simple technology at competitive prices.

Police hunt for five members of kidnap syndicate in Savannah...
36 minutes ago