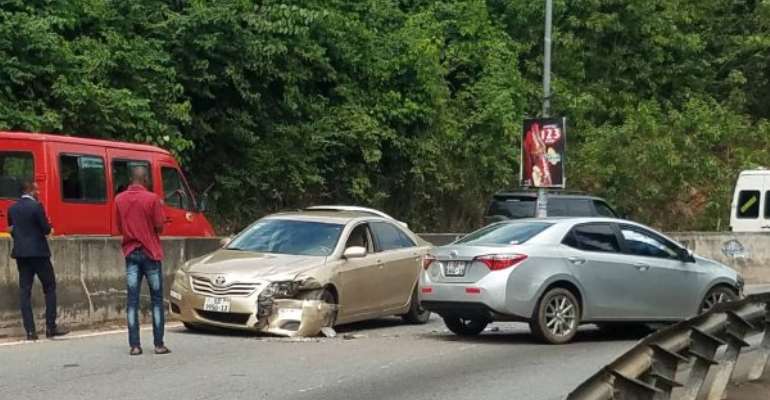 A motor accident occurred Sunday on the Ayi-Mensah-Peduase stretch of the Aburi road in the Eastern region, following the closure of one lane by the Ghana Highway Authority.

The vehicles involved, a Toyota Corolla and Toyota Camry, which crashed head-on.

According to eyewitnesses, the accident was as a result of one of the drivers using the inner lane of the dual carriage stretch which had temporarily been converted into a single carriage road, following last week’s rockslide.

Police are yet to officially comment on the crash.

One of those who spoke to Joy News said authorities could have placed a temporal road sign on the road to inform drivers that the one side affected by the change, is being used differently.

He believes that could have been a possible cause for the accident.

The road closure and traffic diversion come after another landslide was reported on Sunday.

However, some residents in the area continued jogging activities despite fears of another collapse of a mass of earth.

Many of them expressed gratification for the fencing nets put in place but call for stronger measures to prevent future landslides.

Former Member of Parliament (MP) for Tamale Central, Inusah Fusseini, who jogs on the route said that he is proud of the rock-fencing project he supervised while he was head of the Roads and Highways Ministry.

He insisted that there are no fears but “it is just this place that appears to have loose rocks sitting on top of each other” and that “they will dislocate when there is heavy downpour.”

He admits that the rocks are falling but their movements cannot be noticed immediately unless studied over a long period of time.

As a result, he warns that when people ply that route, they must be very careful.