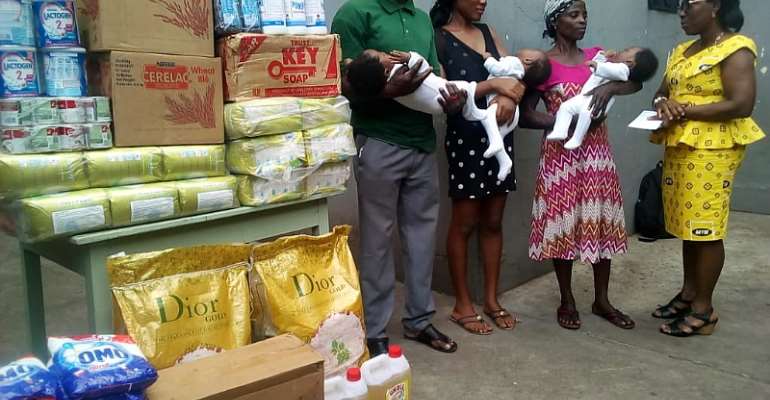 MTN Ghana has donated to Akosua Twumwaah, a grandmother of eight children whose mother died after delivering a triplet at Asafo, in the Kumasi metropolis of the Ashanti region.

The 53-year-old Akosua Twumwaa age 53year has been the breadwinner of the children of a demised mother who passed away after delivery at the hoapital leaving behind three single children, twins and triplets making the number eight.

Presenting the items, Mr. Simon Amoh, Acting General Manager of MTN Northern Business District said the company is touched by the story of the family.

”We at MTN see this unfortunate incident that has happened to the family as our case and since human life cannot be replaced we decided to help the living kids and their granny so that they will have it easy to grow and live”, Mr Amoh stated.

He pledged their company's commitment to supporting individuals and making their lives better and meaningful.

He however called on other individuals and corporate organizations to further extend support to save lives.

Receiving the items Madam Akosua Twumwaah, commended the management of MTN for the kind gesture.

Explaining her ordeals Madam Twumwaah said feeding the kids had not been easy, saying "the father of the kids had been unavailable to fulfill his responsibilities since the demise of her daughter".