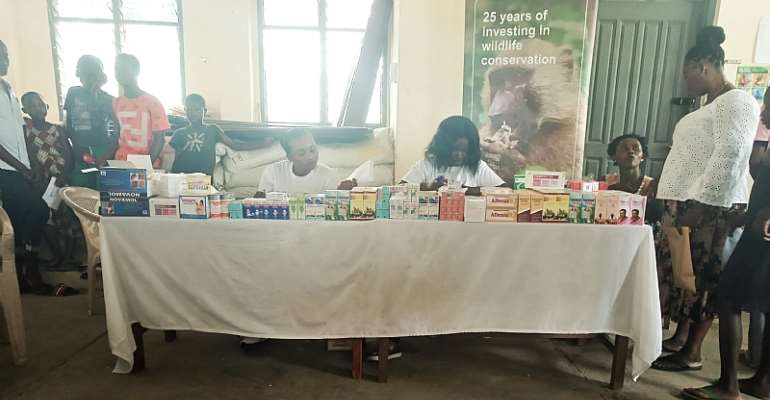 Hundreds of residents of Huniso and Abekoase, communities in the Prestea Huni-Valley Municipality of the Western Region, have been diagnosed of various diseases and given drugs for treatment.

The Community Health Outreach Programme on Saturday October 26, was made possible by Gold Fields Ghana Limited, Tarkwa Mine, as part of their Corporate Social Responsibilities.

The programme which is rotated among the several host communities of the mining firm is done annually, to check the health status of residents of those areas, prescribes drugs for them, advise and refer cases for special attention when the need arises.

A week ago, Nyamebɛkyɛrɛ and Atta-me-Atta communities, enjoyed same exercise by Gold Fields Damang Mine.

Gold Fields Ghana believes that the health aspect of the members who make up their host communities must be seen as very important to the company.

So once a while, Health checks and treatment must be at their doorsteps with medical doctors for easy accessibility.

One could see the young and the aged, walk out of the two community centres where the programme were held, with smiles that depicted satisfaction of the doorstep health care.

One disease that ran through the diagnosed cases was malaria.

One of the Medical Doctors who was part of the team, Dr. Mary Osei told newsmen that, more education must be done on the use of the treated mosquito nets since that is a sure way of preventing malaria.

She said though the health cases differ among the ages, malaria is prevalent among the children whiles the aged are with musculoskeletal disorders (MSDs). Which are the injuries and pain on their bodies due to the farming activities they engage in.

She said, “we need a lot of education that should be done at this place concerning malaria because we have picked a lot of people with malaria over here.”

Dr Osei said the Community Health Outreach programme was a timely intervention to some of the cases among the children, else the ailments would have escalated.

“It’s good we came in to pick it at early stages because the next time you will probably see the child convulsing and in children malaria is different thing altogether. It is not like adult whose immune system is such that it will be able to contain the infection. So childhood malaria comes with a lot of complications so we need to reinforce that aspect of public health education,” Dr Osei stated.

The medical practitioner reiterated the need to also keep their environments clean so as not to breed mosquitoes.

On behalf of the communities, the Unit Committee Chairman for Huniso Emmanuel Mensah expressed his gratitude to the company for the many things they do for the host communities saying, “they are our parents.”