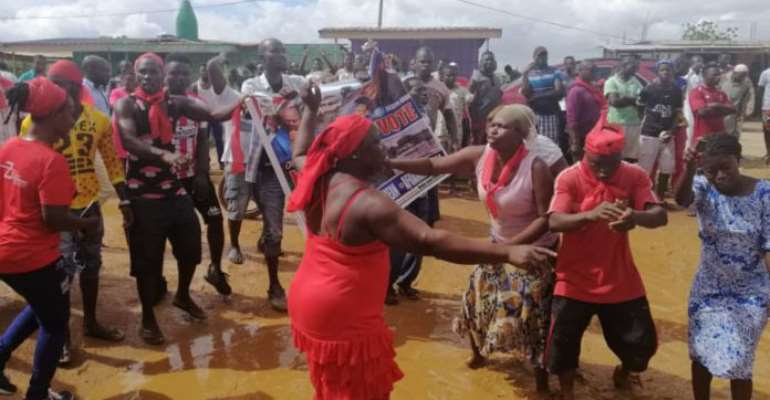 A scene during the protest

A protest by residents and some commercial drivers, who ply the Oduman-Nsakina road in the Ga West Municipality, over the bad nature of their road, left commuters in those areas stranded.

The commercial drivers parked their vehicles and refused to pick passengers to their various locations, while private car owners were prevented from driving through the road.

As early as 6am, the protesters had blocked the main Oduma road which leads to Nsakina and had burnt car tyres at some vantage points of the road thus preventing other road users from plying the roads.

The recent protest was the third time residents in the area had embarked on such an exercise.

At the time DAILY GUIDE visited the scene around 8am, drivers of commercial buses also known as 'trotro' had parked their vehicles and had blocked sections of the roads linking Ablekuma, Manhean, Oduma, Nsakina and adjoining communities.

According to a driver, identified as Ali Baba, their decision to embark on the protest was as a result of the authorities' refusal to fix the road.

He said somewhere last year, some drivers and youth of the area protested about the bad nature of the roads and were arrested.

He continued that a year ago, they were told after a protest, that the road had been awarded to a contractor; but it has been more than a year and nothing has happened.

Another driver, told the paper that the road itself was bad and when it rained, drivers found it difficult driving through.

“Instead of 10 munities, we spend more than an hour to drive from Nsakina to Ablekuma due to the bad nature of the road and this is affecting our work as commercial drivers,” he added.

Adding, he revealed that some of the commercial drivers had refused to move beyond Ablekuma to work in these areas due to the nature of the road.

The recent blockade forced some residents of the area to walk long distances to other locations to pick vehicles to their workplace.

Around 8:30am, personnel from the Amasaman divisional police command visited the area to ensure peace in the area.

A police, who spoke on condition of anonymity with the paper, said the demonstration was illegal and blocking the main road was unlawful on their part.

However, upon seeing two armored cars of the police unit approaching the scene, the drivers and demonstrators bolted the scene to avoid arrest.

The police managed to put out the fire and secured the area for commuters to have easy access.