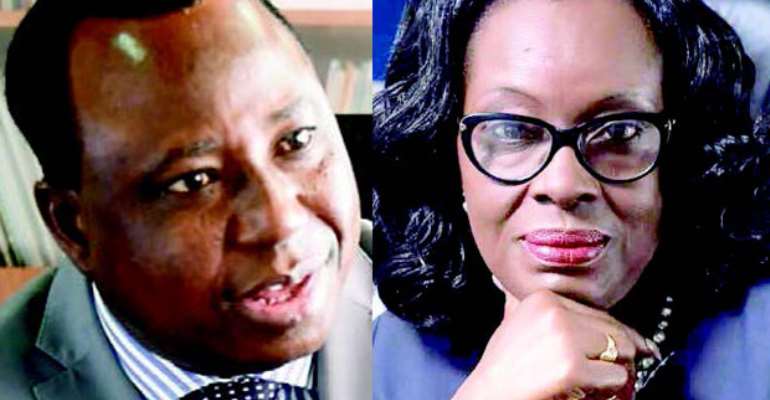 The Attorney General (AG) has reportedly advised the Ministry of Special Development Initiatives to reject aspects of a request from the Commission on Human Rights and Administrative Justice (CHRAJ) in its ongoing investigation into an allegation of conflict of interest levelled against the suspended Public Procurement Authority (PPA) Boss, Adjenim Boateng Adjei.

According to the Attorney General, what CHRAJ is requesting from Hawa Koomson's ministry “smacks of arbitrariness tantamount to an abuse of office,” because the information sought is irrelevant to the case under investigation.

DAILY GUIDE sources at CHRAJ claimed that the AG's 'advice' letter which was written on October 4 to the Ministry of Special Development Initiatives was responding to the commission's request letter of September 20 for information on the case involving the PPA boss.

The CHRAJ request was said to be premised on Section 15(1) (a) and (b) of the CHRAJ Act, 1993 (Act 456) which clearly states that the commission should always request information that relates to the matter being investigated.

However, the AG's letter according to CHRAJ sources “noted that per a referral by the President, the matter being investigated concerns alleged conflict of interest misconduct by the suspended CEO of PPA involving Talent Discovery Limited (TDL), a company in which the suspended CEO hold shares which were allegedly used to sell government contract.”

“In the same premise, we are of the view that the information being sought by CHRAJ is broad and includes material (including minutes of all Entity Tender Committee meetings beginning 2017 to date) which we consider completely irrelevant to the subject matter under investigation,” the letter reportedly advised.

“We note that the large ambit of the information requested is not only unreasonable but also smacks of arbitrariness tantamount to an abuse of office,” the AG is said to have advised, adding “we are of the view, therefore, that even though you are legally bound to assist CHRAJ in any investigation, that responsibility is exercisable to the extent that it is relevant to the specific matter under investigation.”

The embattled PPA CEO was suspended by President Akufo-Addo on August 22 following a documentary titled 'Contracts for Sale' which was put together by investigative journalist, Manasseh Azure, highlighting alleged procurement misconducts on the part of A.B. Adjei.

The 'Contracts for Sale' exposé among other things claimed that Talent Discovery Limited (TDL), a company incorporated in June 2017 and has links with the PPA boss, won a number of government contracts through restrictive tendering.

The documentary also alleged that the company was engaged in selling contracts.

Immediately the documentary was aired, President Akufo-Addo reported A.B. Adjei to the Office of the Special Prosecutor headed by Martin Amidu and also referred the aspect of conflict of interest to CHRAJ boss Joseph Whittal for investigation.

As a result, CHRAJ wrote to Mr. Adjei, giving him 10 days within which to respond to the allegations as contained in the documentary.

CHRAJ Boss Joseph Whittal said on Citi FM on August 26 that the response from A.B. Adjei would determine their next line of action of the commission.

“We had a brainstorming session yesterday. We have assessed the case and we came to the conclusion that it is right for Mr. Adjenim Boateng to give us his comments and to either admit or deny the allegation. He has been given 10 days within which to expressly write his response and any documentation that he would want us to see,” he had said.

“We will study that and carry out our own investigation; if necessary then we'll proceed to invite him if he has not admitted it. If he admits, we will go straight forward and take action based on his information but if he denies it, the Constitution requires us to go into full investigation and take action,” he added.

Mr. Adjei has through his lawyer responded, denying all the allegations as contained in the documentary.

According to the response, neither did CHRAJ's letter indicate with any clarity the specific matters contained in the President's letter nor the documentary by Manasseh Azure Awuni constituting conflict of interest.

It said the allegation contained in the documentary does not impinge on conflict of interest as “a claim of the sale of contracts by TDL after that company had participated in a tender not organized by the Public Procurement Authority (PPA) and it had been declared the successful tenderer not by the PPA but by other entities, has no bearing on a conflict of interest with the duties of our client as a public officer.”

The suspended PPA boss followed it up with a request to CHRAJ to turn investigation of allegations of conflict of interest levelled against him into a public hearing but it is unclear if the commission acceded to the request.

He had said that justice would be better served if his case is held publicly instead of an in-camera hearing, adding that the request for a public hearing is necessitated by the nature of the complaint against him and the “rather devastating harm, albeit unjustified” caused him.