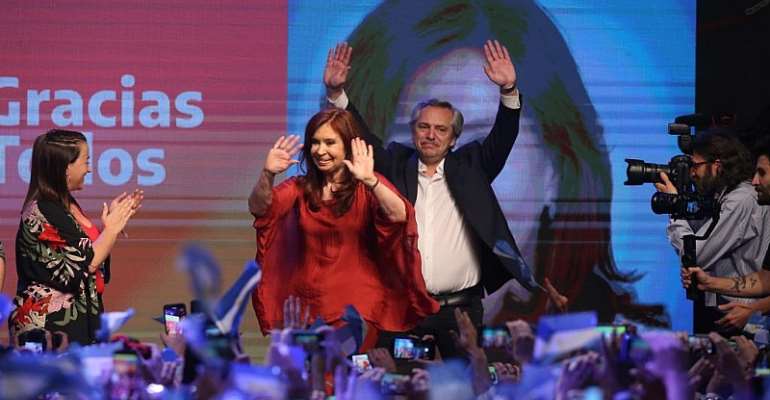 Alberto Fernandez on Sunday hailed his victory in the presidential elections as a great day for Argentina. The 60-year-old law professor took nearly 48 percent of the votes in Sunday's poll beating the incumbent Mauricio Macri into second place.

His win also marks the political renaissance of his running mate Cristina Kirchner. President between 2007 and 2015, she will be his vice-president.

Macri, 60, conceded defeat with around 80 percent of the vote counted. "There wll be a healthy and constructive opposition," he added

He said he had spoken to Fernandez and had invited him for talks. "We have to start a period of orderly transition that will bring tranquility to Argentines," Macri told his supporters.

Economy
Fernandez will assume power on 10 December and his initial tasks will be to calm volatile markets and tackle a recession in the country.

"The days of 'Us' and 'Them' are over," he said. "We are in an enormous crisis. Everyone has to take responsibility for what's ahead."

The return to power of a leftist Peronist candidate comes amid market fears of a possible default on a 51 billion euro IMF loan.

The peso fell 5.86 percent in the week before the elections and the week ended with the dollar at 65 pesos.

"The markets will be negative," said Nicolas Saldias, a senior researcher at the Wilson Center in Washington.

"It won't be as brutal as in August after the primary result but people are taking their money out of the country and out of the banks.

"Macri is the president but Fernandez has the power. There has to be some signal that they are working together."

Fernandez has insisted his government would not default on the loan but instead try to renegotiate the terms of the deal.