"He Died A Whimpering Dog, A Coward" — Trump Confirms Death Of IS Boss 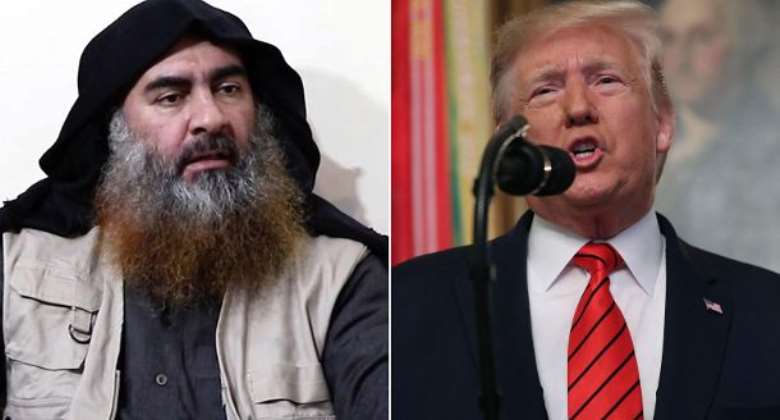 The terrorist militia "IS" has put the world in terror. Now an important strike against the terrorists has succeeded - the US President Trump announced personally.

The head of the terrorist militia Islamic State (IS), Abu Bakr al-Bagdadi, has been killed in Syria, according to US President Donald Trump. Al-Bagdadi was killed during an operation by US special forces in northwestern Syria, Trump said in a speech at the White House on Sunday morning (local time). Many of his fighters were also killed. US soldiers were not harmed. Al-Bagdadi died when he detonated an explosive vest during the operation.

According to Trumps, a "large number" of IS fighters and al-Bagdadi's companions were killed during the military operation. There had been no losses among the US soldiers. According to the US President, eight US helicopters had landed at the place where al-Bagdadi was staying. The IS chief then fled into a tunnel, "dragging" three of his small children with him. Then he detonated the explosive vest.

Trump explained that al-Bagdadi did not die like a hero. "He died a howling, whimpering dog, a coward," said the US president. "He was a coward who died in a cave whose end was bricked up."

According to Trump, the US soldiers spent about two hours in the property. They had found important material, including the "future plans" of the IS.

Apparently prepared for months of deployment

The commander of the Syrian Democratic Forces (SDF), Maslum Abdi, wrote on Twitter that Baghdadi's death was the result of more than five months of intelligence cooperation. The IS chief was then killed in a joint operation. The SDF, dominated by the Kurdish militia YPG, have so far been the most important ally of the US armed forces in the fight against the IS. Recently, however, this alliance came under considerable pressure.

Trump has been criticized for weeks for withdrawing US troops from the northern Syrian border with Turkey. This paved the way for a Turkish offensive against the YPG in the region. Trump was also accused by his own republican party of abandoning the allied Kurdish militia.

The whereabouts of the IS leader, who had already been declared dead several times, were unknown. Al-Bagdadi was one of the most wanted terrorists in the world with a bounty of 25 million dollars (about 22 million euros) suspended by the USA. Most recently, the IS had distributed a video with Al-Bagdadi in April, in which he threatened the West with attacks.

Details of the biography of Abu Bakr al-Bagdadi, the self-proclaimed "Caliph Ibrahim", should be treated with caution. Often they cannot be verified. For a long time, hardly anyone knew what the head of the terrorist militia IS looked like, as there were only two photos of him.

A few days after the caliphate was proclaimed at the end of June 2014, he then appeared in a mosque in the northern Iraqi city of Mossul, where he preached the Friday sermon. After that, however, he did not show himself for a long time. Again and again there were rumours that he had been injured or even killed in attacks. Only in April - after the final disintegration of the caliphate proclaimed by the IS - did he appear a second time in a video. In between, the IS occasionally spread audio messages from its leader.

Al-Bagdadi was born in 1971 in the Iraqi city of Samarra. He graduated from Baghdad University with a degree in Islamic Studies. After the fall of long-term ruler Saddam Hussein in 2003, he spent some time in a US prison in Iraq.

With the proclamation of the Caliphate, the terrorist militia renamed itself the Islamic State. This was connected with the claim to unite and lead all Muslims worldwide. Gradually, however, the IS lost its territory in Iraq and Syria. Officially, the IS was defeated with the fall of its last retreat in Baghus in Eastern Syria.

Only a few months ago, however, the anti-IS coalition led by the USA assumed in a report that between 14,000 and 18,000 IS members would still be in the former territory of the extremists between Syria and Iraq. IS offshoots are now active in many countries.