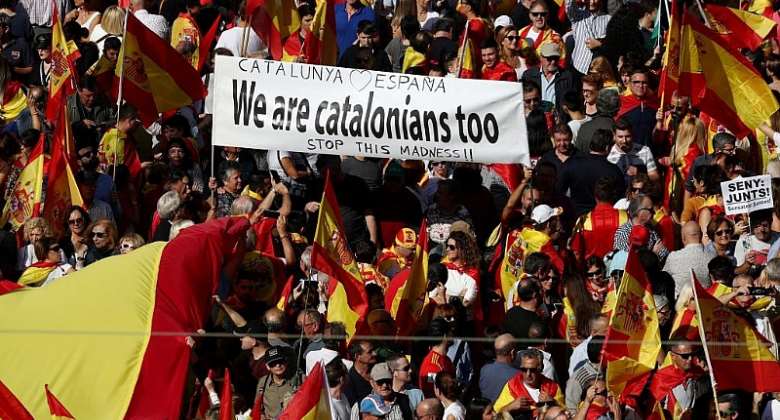 The streets of Barcelona were thick with crowds waving yellow and red Spanish national flags on Sunday to the sound of gentle music. On Saturday it was the turn of the Catalan regional separatists, who maintain calls for independence. Spain's second general election this year is due on 10 November.

One-Spain Sunday
Barcelona's police say 80,000 people rallied on Sunday, following the call of the Societat Civil Catalana, in English Catalan Civil Society. Many of them carried Spanish and Catalan flags.

While only just over a quarter of the number of Saturday's pro-independence marchers, the pro-unity supporters have been heard to day they are a "silent majority."

Separatist Saturday
However, the pro-independence crowd are vocal. Around 350,000 rallied in central Barcelona on Saturday, according to local police estimates.

The main rally on Saturday was called by the ANC and Omnium Cultural, the region's two biggest grassroots pro-Catalan independence groups.

They continue to demande the release of nine separatist leaders, given stiff prison sentences two weeks ago.

The march was peaceful until early evening when thousands of people joined a separate demonstration called by the radical CDR near the police headquarters.

Amid shouted angry slogans, the protestors hurled hundreds of multicolour plastic balls and marbles at the riot police guarding the building.

The police, armed and shielded, did not respond.
The source of the anger
On 14 October, the Supreme Court handed down long prison sentences to nine of Catalonia's separatist leaders, found guilty of sedition after the failed unilateral attempt to separate in 2017.

The verdict unleashed violent protests.
According to official figures more than 600 people have been injured in the protests, 367 of them civilians and 289 police.

The crisis stems from the regional authorities holding a banned referendum on 1 October 2017. They followed up by issuing a short-lived declaration of independence for the north-eastern region.

Lobbying as elections loom
Catalonia's regional premier Quim Torra said he wants to hold “dialogue with no conditions” with the central government. Prime Minister Pedro Sanchez has so far cocked a deaf ear to Torra's appeal.

Sanchez' Socialist Party, like its rivals, is gearing up for the second general election of the year slated to take place in two weeks from now.

The party won the April elections but without a big enough margin to govern alone.

The Catalans, some seven and a half million in all, are sharply divided over the question of independence. A poll from July, widely cited across online media, shows 44 per cent of Catalans in favour of independence and 43.6 percent oppose it. In the 2017 referendum on independence, only 43 per cent turned out.