Pt 1: Dealing with Ebola in a town called Bingo 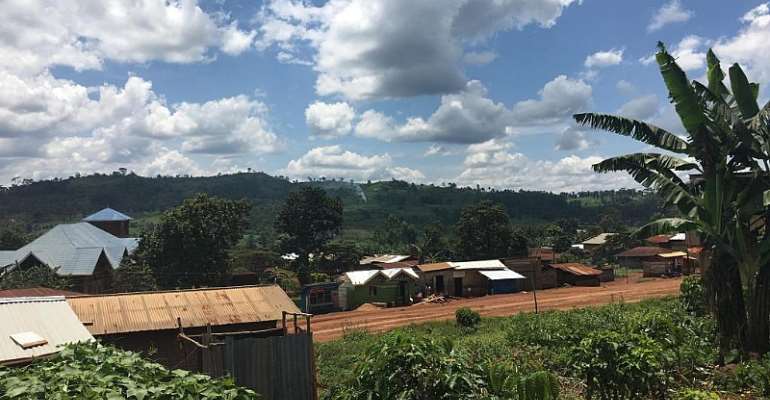 It's recess time for the children in Kianzaba Primary School and they are noisily running down the hill to see what the surprise visitors are doing with a big truck.

In the first of a four-part series of the impact of Ebola in the DRC, Laura Angela Bagnetto profiles the town of Bingo in North Kivu, eastern Democratic Republic of Congo.

Workers carrying sacks of rice and beans place them under a tree, as a few people begin to line up. The chatter of children fills the air.

“In this school, there was a child who died of Ebola and they came to vaccinate the whole school,” says civil society leader Filemon Mwindo Tasakana, who wears many hats in the tiny town of Bingo, population 3,000.

Mwindo says that not everyone is vaccinated here, even though the first registered case on 1st August, 2018 came from Mangina, another town just five kilometres from Bingo.

It took time for people in Bingo to understand that the hemorrhagic fever could kill, he says.

“At the beginning, people thought it wasn't a normal sickness, they thought it was because of witchcraft, or even politics,” he says, referring to the fact that the DRC's National Independent Electoral Commission (CENI) blocked part of North Kivu from national elections on 30 December 2018 due to fears it would spread Ebola. Angered, some participated in a popular vote nevertheless.

North Kivu has been hit hard over the past year, with more than 3,000 cases or suspected cases of Ebola, and at least 2,000 deaths.

The civil society leader was key in sensitizing the rest of the town in Kiswahili and Kinande, the local language. He was tasked to pick two people to help with Ebola victim burials, which must be handled with full protective gear.

Although he initially gave Congolese health authorities the names of two people from Bingo, one bowed out because their family did not want them to carry out the hazardous work. Mwindo says he's vaccinated, because he stepped in to work on the team.

Food distribution for those in contact with Ebola victims

The primary school headmistress is standing at the top of the hill, calling the children back to class. They haven't moved, so she has picked up a stick and is heading towards the biggest group gathered on the side of the red dirt rise. Playful screams ring out around the hill as her presence is enough of a threat for them to high-tail it towards the classroom, some losing shoes in the process.

Back at the tree, workers from Caritas, a Catholic aid organization working with WFP are taking care of a food distribution for what health authorities call 'contacts'. These are people who have been in close proximity to a person who has Ebola -- usually a neighbour, friend, or family member. They are given a 60-kilogram sack supplied by the World Food Program containing rice, beans, oil, and salt once a week for a month.

Ebola can strike up to 21 days after a person has been in contact with someone infected with the virus. During each weekly food distribution, the one family member needed to picks up the sack has their temperature is checked by aid workers. The aim of the food distribution is to encourage family members to avoid going to market and possibly infecting others.

Farmer Kambale Saliboko cultivates cassava, maize, and he says he sometimes grows beans. He hasn't been to his field because one of his neighbours fell ill and tested positive, and then one of the neighbour's sons died of Ebola. Saliboko has been monitored for the past three weeks. Today, he picks up his fourth and final food sack for his family of five.

“Mama prepares the food, and it helps us, so we don't leave home. I haven't gone to my field since I started receiving this food. But maybe I'll go back to the field next week,” he says.

A sign posted at each distribution in French, Kiswahili, and Kinande indicates the amount of food distributed in each sack. At the top of the sign, there are 0 kilograms for ground maize. Maize is a staple for those living in the North Kivu region, but only maize that has been grilled first, so the sugar is released when it is ground, making it tastier.

The ground maize supplied by WFP had not been grilled, and people did not like the flavour. After listening to complaints, WFP changed their maize rations to rice for the whole region.

The food distribution is winding down as civil society leader Mwindo speaks again about the sensitive nature of Ebola victim burials.

“For the Nande [people], they already understand, there's not a lot of problems with burials, but this is still an issue for Muslims,” he says.

Those who have died of Ebola must be put into a body bag by people wearing full protective gear, including gloves, rubber boots, a smock and full protective face and neck covering. The body bag is then placed into a coffin for burial.

The Muslim community is very small in the Bingo area -- faithful attend one of two mosques. Ismael Kambale Mate, a young man with intense eyes who lives in the town speaks to RFI. He has painted his name as well as “Bismillah”, 'in the name of God', in Arabic on the wall of his home.

Kambale says he objects to the way the Ebola dead are handled.

“For others, it's fine to bury a person in a coffin, but we Muslims refuse to have our people buried that way because the custom is different,” he says, although he adds that he would like someone to explain this necessity to him again.

For some, religion played a role in trying to understand exactly what Ebola is.

Bingo resident Alfonse Mbere Muti Aherire, a religion teacher who smiles when he speaks, says he turned to what he knew. “In the Bible, there was a sickness called Taune that ravaged a very large number of people,” he replies.

“I thought Ebola was this sickness, this was a sign,” he adds. It prompted him to speak to local health authorities to better understand the disease.

Doubts about the disease
Local civil society leaders like Mwindo have made efforts to ensure that people understand the disease and follow strict hygiene standards, including washing your hands with chlorinated water, not touching people or shaking hands, not touching the dead or items of clothing that belonged to the dead. But doubts remain that Ebola is real.

Houses, shops and places of worship dot both sides of the unpaved, red dirt main road in Bingo heading towards Mangina. Carpenter Sombi Hassani works outside his atelier, planing a piece of wood that will soon become a door. Hassani works steadily as he speaks, concentrating on his task while giving his opinion. He says Ebola is a lie.

“I don't know where this came from. It's something bad the white people brought here,” he says. “Before, people died from vomiting and nosebleeds,” he says, citing two of the key symptoms of Ebola. “It's a sickness that existed before.”

Bingo fears of Ebola… and armed militia
Following the main road in Bingo, which eventually leads to Mangina, a number of homes scattered behind the center of the town backs on to another green hill. Mwindo motions towards the hill. “That's where the Mai-Mai live,” he says, speaking of one of the 70 armed militias who have terrorized the people of Bingo and the surrounding area since the early 1990s.

The Mai-Mai originally formed to defend the area from other armed groups, but as time passed, their original motive seems lost in the mix as reports of massacres of civilians in nearby Beni, the largest town in the area, are on the minds of those in Bingo.

The possibility of attack is part of life here, as various armed groups extort money and threaten townspeople.

Moto taxi driver Bernard Munyoko is sitting with his fellow drivers at the taxi stand, a small, three-sided wooden veranda with a bench with a simple roof. He, like the others, is waiting for fares, ready to whisk the next mama or papa who needs transport to their destination. Many of the shiny chrome and red motorcycles look new, or at least well-polished.

Munyoko says people are afraid of the Mai-Mai militia here in Bingo, and he is afraid of Ebola, but the police are the worst.

“The police stop people here by force. Even if you're trying to flee to Mangina, they'll pursue you all the way to Mangina,” he says.

The police monitor the town barrier, where anyone going in or out must wash their hands with the chlorinated water provided, and have their temperature checked.

“I remember another time at the barrier, a mother showed some symptoms of Ebola, and the police vehicle pursued her to Beni,” he adds.

And yet, everything is not always what it seems. Traditional practitioners have been blamed for trying to treat patients with Ebola, and then spreading it to others. On the road out of Bingo, a large, hand-painted sign announces the list of ailments “Dr. Djuma” will treat. Ebola is absent.

Outside his compound is a basin and a place to wash your hands with chlorinated water. Djuma Takomzi says that he is from a family of traditional healers, and his skills have been passed down through the generations, although he says he has added Chinese medicine to the mix. For his patients in and around Bingo, there is no typical ailment.

“I treat a number of illnesses, such as prostate problems, diabetes… if I start listing all the illnesses I treat, we'd be here all day,” he says.

Stressing that he takes precautions with gloves and 'thermoflash' electronic thermometers, Takomzi is very aware of the threat of Ebola in the town. He says has been trained by local health officials to look for symptoms of Ebola.

And his experience is perhaps different from the average Bingo resident.

“For me, it's not something strange, because I'm not originally from here,” he says. “I'm from Equateur [region], at Boomba,” he says. His hometown was where the first case of Ebola was found in 1976.

“I grew up knowing that Ebola exists -- I've seen people who had blood come out of their nose and ears,” he adds.

Although they live in the shadow of the area's original epicenter, the people of Bingo have managed to deal with Ebola for more than a year.

While numbers of cases are beginning to drop in Bingo and in the greater Beni area, there is still reason to fear the militia just over the hill, and the continual, if diminished, threat of the deadly hemorrhagic fever.