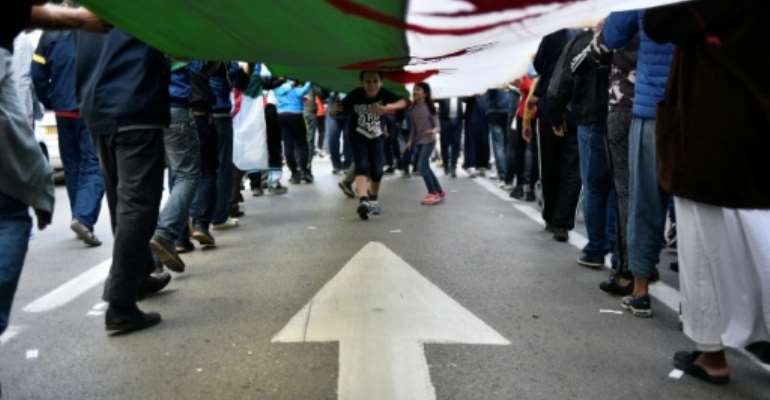 Algerian protesters have demanded sweeping reforms ahead of a December presidential vote. By RYAD KRAMDI (AFP/File)

Former premiers Ali Benflis and Abdelmadjid Tebboune had submitted their candidacies for the December 12 vote before the deadline for nominations passed Saturday.

Both are considered front-runners in an election which however is opposed by the mass protest movement that alongside the army forced Bouteflika to resign in April.

Activists are demanding sweeping reforms before any vote takes place, and say Bouteflika-era figures still in power must not use the presidential poll as an opportunity to appoint his successor.

Polls originally planned for July 4 were postponed due to a lack of viable candidates. Observers are predicting a weak turnout in December.

After his dismissal, Benflis ran as Bouteflika's main opponent in 2004 and 2014, coming a distant second both times as the president was re-elected with over 80 percent of the vote.

Tebboune, 73, was a senior civil servant before serving as a minister from the 1990s.

After Bouteflika assumed the presidency in 1999, Tebboune was minister of communication, obtaining further portfolios in 2002.

Bouteflika appointed him prime minister in May 2017 before sacking him less than three months later against a backdrop of factional fighting in government.

Other Bouteflika-era stalwarts are also running, including Azzedine Mihoubi, leader of the Democratic National Rally party (RND) which was the main ally of the former president's party, and Islamist former tourism minister Abdelkader Bengrina.

The elections authority, which was recently formed to oversee the vote, has seven days to approve the nominations before passing the list to Algeria's constitutional council for final validation.