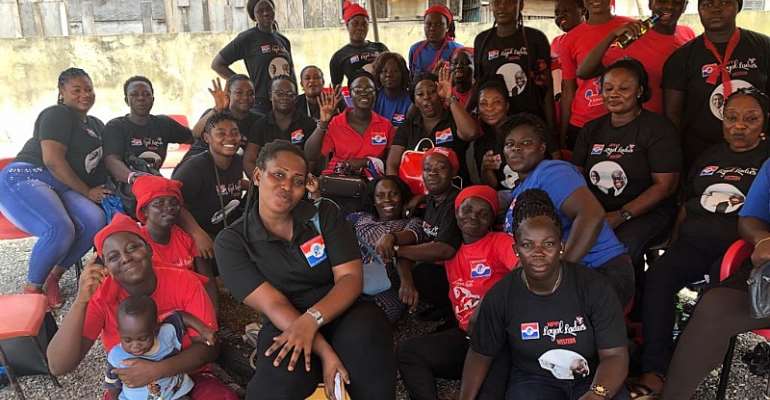 The Western Regional Captain of the NPP Loyal Ladies, Miss Rhodalyn Eshun yesterday, October 25th, 2019 paid her last respect to a member at a burial and funeral rites at Mpohor in the Western Region.

Miss Rhodalyn was accompanied by some of her Commanders including Mrs. Olivia Agyemang, Commander for Effia Kwesimintsim, Madam Patience Appiah Dankwa, Loyal Ladies Commander for Takoradi and Miss Mercy Baiden, the Commander for Mpohor and hundreds of loyal ladies from across the region to bid farewell to their colleague.

We also took the opportunity to visit the Mpohor DCE Hon. Ignatius Assah-Mensah in his office.

Miss Rhoda, delivering her tribute on behalf of Loyal Ladies in Western Region hailed the young woman describing her as a true patriot, who has contributed immensely to the fortunes of the New Patriotic Party in the MPOHOR Constituency and the Western Region at large.

She further expressed her deepest sympathies to the parents and family of the late Abigail who, she said, had sacrificed so much for the common cause of the New Patriotic Party and the Loyal Ladies.

"It will be recalled, that in June this year, she helped the MPOHOR Commander to mobilise teeming ladies that attended the Women Conference organised I organised for young women at the Kingstel Hotel in Takoradi"

Madam Rhoda in her address made a passionate appeal to the bereaved family to get Loyal Ladies a successor for Abigail, "We want to assure you that Abigail's affiliation with the NPP Loyal ladies will not die with her, she must get someone from the family to replace and continue the good work she was doing for the NPP and Ghana.

Miss Rhoda and her Commanders later paid a courtesy call on the District Chief Executive, DCE for Mpohor, Hon Ignatius Assai-Mensah in his Office, after which the delegation proceeded to the maiden Regional Tescon Conference & Orientation in Takoradi.