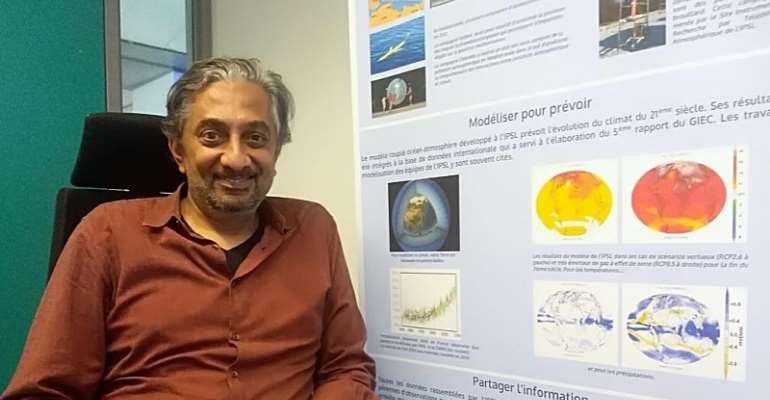 Following President Donald Trump's announcement of the US withdrawal from the Paris climate agreement in June 2017, French President Emmanuel Macron launched the Make Our Planet Great Again (MOPGA) initiative to attract researchers from all over the world to France to develop cutting-edge research for fighting climate change.

Dr V. Balaji, a climate scientist from Princeton University, is one of the 18 laureates who have been selected as a part of this programme. Over the next five years, Dr Balaji will be working at the Sorbonne University to develop a new Artificial Intelligence based technology for building efficient climate models.

In an exclusive interview with RFI's Dhananjay Khadilkar, Dr Balaji talks about his research project, the MOPGA initiative and working in France.

Q1 What attracted you to the MOPGA initiative?

The announcement came soon after the 2016 US Presidential election. At that time, there were concerns that the administration (in the US) would go very strongly after climate science as there were climate change deniers and that they were very keen to suppress any information about climate science coming out. We were worried at that time. I wanted to make sure that some of the new research areas I was working on could continue regardless of what the funding situation in the US was.

Q2 What research will you conduct at the Sorbonne University?

I am attached to both Princeton and Sorbonne, and currently on leave of absence from Princeton. My work in France is more or less a continuation of the theme from Princeton. However, the new direction I am taking is inspired by the Artificial Intelligence technology that features in many applications these days. It's called deep learning or machine learning. I am interested in harnessing the power of deep learning to improve our models. The project I am working on is called HRMES (High Resolution Modelling of the Earth System).

Generally, high resolution climate models are built by using the power of supercomputers. But these machines are very expensive and we can't run them for long periods of time. If we want to use them frequently for studies, we have to make cheaper versions of the models. The idea is that we use deep learning to learn from high resolution models, to learn how they behave and try to emulate their behaviour by using simpler systems.

Q3 How much difference will this new approach make to climate modelling?

The main difficulty right now is that we have been relying on continual miniaturisation of transistors. This is represented by what is known as the Moore's law, which says that after every 18 months of so we can build a transistor that's half the size of the previous one.

Each time you make transistors smaller by a factor of two, your machines get faster by a factor of two. The miniaturisation has been going on for many generations. Consequently, the power of computing over the past four decades has gone up several tens of orders of magnitude. This was also the time which saw the growth for climate and weather computing.

But the fact is that you cannot continue to miniaturise transistors forever. For example, the smallest transistors we can fabricate today is about 5 nanometres. That is just 30 atoms! We are reaching the limits of miniaturisation. Therefore we have to look for different ways.

Deep learning is a new way of going about it. You don't just solve equations but you run the equations, follow the behaviour of the system solving the equations, represent the learning methods, understand what it is doing and then try to mimic it. This approach will save money, time and energy. It will also require much less computing power. We will also lower the carbon costs of running the simulations.

Moreover, climate models are traditionally run in very big centres where there is access to a supercomputer. Imagine a student with a bright idea sitting in a university in some part of the world. Usually, university students won't have access to these big machines.

So what I am hoping is that through the new technology, the machine learning agent will learn what the big models do and will be able to emulate that without running the full equations. These can become tools that many people will have access to. The idea is to give larger access to these models so that it's easier to operate and maybe easier to do experiments.

Q4 What changes in climate do these models predict?

How do we know the climate is going to change? This is a question which cannot be answered through direct experimentation. The climate change theory goes back to a century to a scientist named Svante Arrhenius who said that if we kept increasing the carbon dioxide levels in the atmosphere, our planet will get warmer. This is because of the interaction between carbon dioxide and the radiation from the sun.

One of the giants of the field, Suki Manabe while working in Princeton created the first atmosphere model and then a coupled ocean-atmosphere model which demonstrated that if you have a certain amount of carbon dioxide and you run the model, a certain global temperature is reached.

In 1979, there was a report by Jule Charney, which said that if you double the amount of carbon dioxide in the atmosphere relative to preindustrial times, the temperature will rise somewhere between 1.5 to 4.5 degrees. It stated that the sea levels will rise and precipitation patterns will change. Some areas will become drier, some will become wetter.

All these changes are going to happen on a planetary scale. That's what our models predict. Some of these results can only be done with models. We use computer simulations and try to make it as close as possible to the real world. Earlier, there were only one or two models in the world. But today we have 40 or 50 models.

Periodically we take all these models and run common experiments. The Intergovernmental Panel on Climate Change (IPCC) report that's published every six years is based on the outputs of these models.

Q5 Can you give us couple of examples of scenarios that your climate model has predicted for the future in the event the global temperature keeps rising?

But as one moves away there's a band of deserts in both the northern and southern hemispheres. The reason for this is described by the Hadley cell effect which states that as the air goes up at the equator it precipitates creating forests. But as it heads away from the equator, it dries out and there is no cloud formation. As a result you get less rain which leads to the formation of deserts.

One of the evidences we are seeing is that due to climate change, the Hadley cell is going to expand slowly. The north edge is going to move more northward and the south edge southward.

What this means is that the areas which have been on the edge of the desert belt that had good rain and good agriculture are going to get drier. If you look at France, it's already on the edge of a desert. France is just across the Mediterranean Sea. We are already feeling the effects of increasing temperatures in the south of France.

If you look at Australia, there are mostly deserts in the northern half closer to the equator. The southern half is greener. A lot of the country's agricultural activity is in the south of the country. But southern Australia too is facing lots of issues with drought.

And there are some frightening predictions about what will happen in Northern India within a few decades if climate change continues unabated.

Q6 As a climate scientist, was it heartening to hear about the MOPGA initiative considering the US decision to withdraw from the Paris climate agreement?

Being a part of the MOPGA initiative has been an extremely positive experience. We have been extremely well received. Of course, my research in the US is still continuing and within our peer community there's a lot of respect about what's being done. But in the US, it is very clear that outside the scientific community and outside certain sections of the population, there isn't much interest in what we do. Climate denialism is a very strong force. And it is not just by accident.

There are a lot of people and forces that are trying to make sure that the public never learns what the scientists are saying. There is disinformation being spread in the public media about the results of climate science.

One of the things I feel good about France is that the general public is extremely engaged with the climate change problem. People think really hard about things like decarbonisation, as to how should the country move towards zero carbon economy… what does it mean to the people, how should they change their behaviour, how should they travel, what should they eat.

Here, I find a lot more consciousness about why should I eat a summer fruit in winter and get it from say New Zealand. This kind of awareness is much stronger here. When I interact with members of the general public, I find there's a lot of interest in these subjects. There are many events around the city and in popular culture related to environment. And I am not just talking about demonstrations.