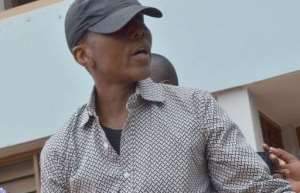 The Accra High Court, hearing the case involving Gregory Afoko and Asabke Alangde accused of the alleged murder of the former Upper East NPP Regional Chairman has been adjourned.

On Friday morning, when the case was called the presiding judge, Justice Merley Afua Wood, a Court of Appeal judge sitting with additional responsibility as a High Court judge said in view of the application before the Supreme Court, the case would be adjourned for two weeks.

She, therefore, adjourned the case to November 8.

Meanwhile, both counsels for the accused persons told the court that they had been served with all the necessary documents. The prosecution, as well as both accused persons, were also in court.

Counsel for Gregory Afoko has filed two applications at the Supreme Court: a certiorari for the revocation of the bail by the High Court to be quashed and a prohibition to stop the trial judge from hearing the case.

They have also filed an appeal at the Court of Appeal challenging the revocation of the bail by the trial judge.

The facts of the case as read by the prosecution, Ms Appiah Oppong, was that Afoko is a farmer while Alangde is a butcher, both residents of Bolgatanga in the Upper East Region.

She said Afoko is the younger brother of Mr Paul Afoko, former Chairman of the NPP whilst Alangdi was a member of the youth wing of the Party.

She said both accused persons were known to Adams, the deceased, thus, on May 20, 2015, at about 11 pm, the deceased in his car had arrived from his construction site in front of his house when the two men approached him and signalled him to roll down his car window.

Ms Appiah Oppong said immediately he did so, the two poured some acid on him which made him scream from the burning sensation to attract his wife’s attention, after which the two bolted.

She said Adams sustained burns on his head, face and body whereas the wife who assisted him out of the car also had burns on the breasts and chest.

The prosecution said the wife asked who had done this to him and he mentioned Afoko and Alangdi.

She said Adam’s wife then called for help which attracted sympathizers, who conveyed the victim to the Bolgatanga Regional Hospital, where he died the next day at the Intensive Care Unit.

Ms Appiah Oppong said the matter was referred to the police and a plastic cup, a gallon of some acid, as well as clothes belonging to the deceased, were collected for investigations. The car seat was also soaked with some of the liquid.

She said a tracksuit and other items believed to be for the accused persons’ were also taken at the scene by the police.

She said they were sent to the Ghana Standards Authority for examination and it confirmed the liquid was acid.

The Prosecution said based on this information, Afoko was arrested who then led the Police to Alangdi’s house but he had escaped.

He said on May 15, 2015, a Pathologist Dr Lawrence Adusei’s autopsy report indicated that Adams suffered shock and extensive acid burns.

Afoko was standing trial until Alangdi was arrested on January 25 in Cote D'Ivoire with the help of the Interpol and handed over to Ghana.