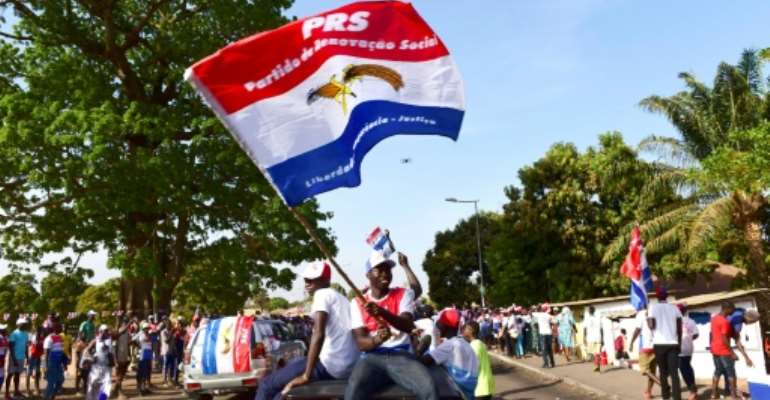 Police in Guinea-Bissau on Saturday blocked opposition supporters from holding a demonstration calling for a delay to next month's presidential election, with one protester killed and several injured.

Police used batons and tear gas to keep protest organisers from the Party for Social Renovation (PRS) inside the party's headquarters, as thousands of marchers converged on the area.

The opposition wants the vote postponed in order to allow an overhaul of the electoral register to limit potential voter fraud.

Demba Balde, 48, was in the PRS offices when "a cordon of police armed with clubs and grenade launchers prevented us from going out to join our friends in the street," the victim's brother Alimo Balde told AFP.

"There were scuffles and Demba was arrested by four police officers who beat him and sprayed him with (tear) gas. He fell, bloodied, and was struggling to breathe. We tried to bring him round but sadly he passed away before arrival at the hospital," Alimo Balde said.

A picture of the man seen by AFP showed him on the ground with a pool of blood around his head. A nurse at the main morgue in Bissau said that they had received the body and it carried "signs of beating".

Parliamentary elections on March 10 passed off peacefully, but this impoverished former Portuguese colony is still struggling with the crisis unleashed by President Jose Mario Vaz's decision in 2015 to sack his Prime Minister Domingos Simoes Pereira.

The West African state's Supreme Court said two weeks ago it had approved 12 candidates to contest the poll, including incumbent Vaz, who intends to stand again as an independent candidate.

Several candidates saw the court reject their bid to stand, but the international community has stated the electoral calendar should be respected.

Vaz, 62, became president in 2014 after elections billed as a new start for a country that had known only coups and turmoil since the end of Portuguese rule in 1974.

Akufo-Addo is sleeping on the job, he’s a failure – Ofosu Am...
27 minutes ago