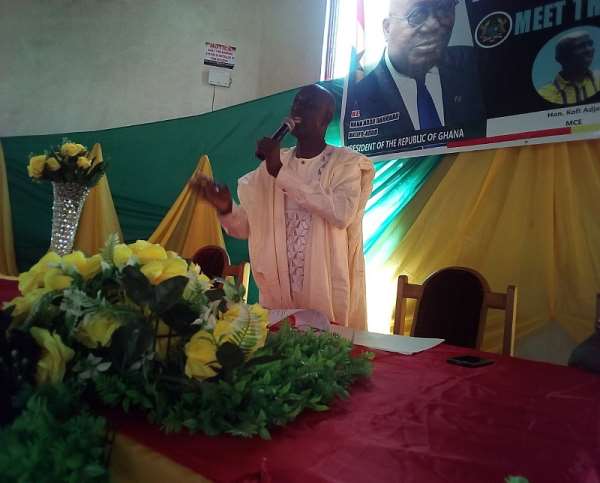 The Berekum East Municipal Assembly on Thursday organized its maiden meet the press series with the issues of deplorable conditions of roads dominating questions by the over twenty media personnel present at the event. Though other questions were asked but the concern of many journalists at the event centered on what government was doing to address the deplorable nature of roads in the Berekum Municipality to ensure accessibility and safety of commuters.

In response, the Municipal engineer of the Ghana Highways Authority Mr. Samuel Gyimah gave an account of the roads that have been worked on so far and the Authority’s plans for the road sector in the Municipality. He explained that work will resume on some of the roads after the rains have subsided. These according to include potholes patching and the reshaping of other roads especially in urban Berekum. Adding his voice to steps government was undertaken to address the issues and responding to questions about the Sino Hydro road project for which Berekum is a beneficiary, the Municipal chief Executive for Berekum, Mr. Kofi Adjei stated that nothing has changed about the Sino Hydro roads project and expressed the hope that the project will bring some relief in the road sector. He added that he has personally engaged the contractor working on the Berekum Seikwa road, Messer’s. J.Adom who has since promised to return to site.

Other questions and concerns by the media personnel at the program were on government flagship programmes like the One-District-One-Factory, the Secondary Cities programme, amount of money disbursed under the One-Constituency-One Million Dollars, sanitation and other projects executed by the Assembly since 2017.

In his earlier address to the media before the questions and answers session, the Municipal chief Executive, Mr. Kofi Adjei gave an account of the stewardship of the Nana Akufo-Addo led government for the past thirty-two months. On the Free Senior High School policy, the Municipal Chief Executive said the policy has resulted in increased enrolment in the three public senior high schools in the Municipality. “ It is worth mentioning that, the enrollment figures for the Free SHS in the Berekum municipality has increased from seven thousand, one hundred and seventy three (7,173) in 2016 to eight thousand, five hundred and fifty one (8,551) in 2019”. He emphasized.

Touching on government’s One-District-One Factory policy, Mr. Adjei revealed that a chalk factory is being set up in the Municipality while work was about to begin on a cassava processing factory under the Youth Enabled One-District-Factory programme spearheaded by the Rural Enterprises Project(REP).

Under the One Million Dollars-One Constituency Programme, the Municipal Chief Executive stated that 4No. 10 seater Water Closet Toilet facilities have been constructed at Biadan, Mpatapo, Mpatasie and Kutre while construction of market sheds at the Berekum Rawlings Park market, drilling and mechanization of one borehole at Nyamebekyere, and paving of Berekum Thursday Market were ongoing.

The Municipal Chief Executive praised President John Agyekum Kuffour for initiating the Town Meeting and also applauded the current president,Nana Akufo-Addo for decentralizing it to the Metropolitan, Municipal and District Assemblies level.